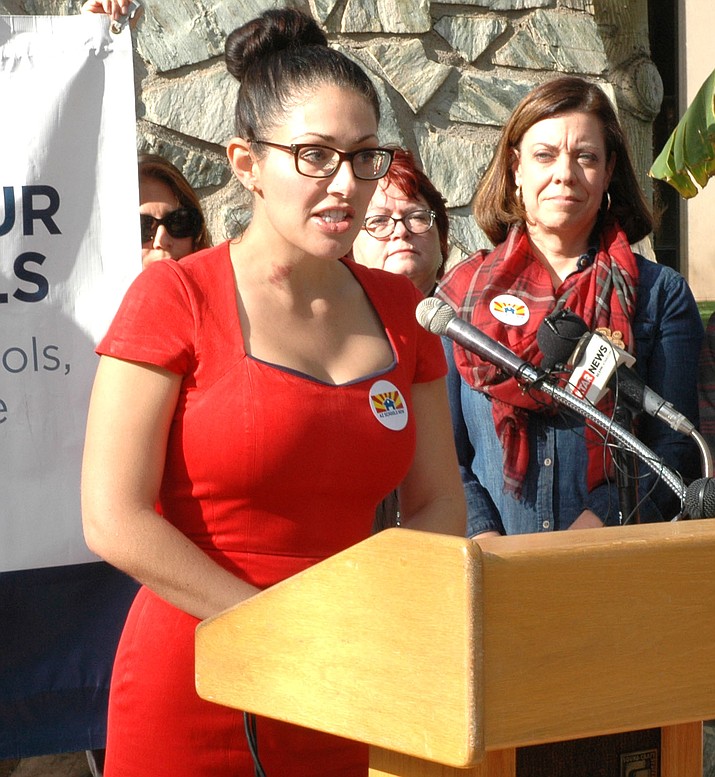 PHOENIX -- An organization of public school supporters wants voters to limit the number of vouchers of state tax dollars that parents can use to send their children to private and parochial schools.

The initiative drive launched Wednesday by Save Our Schools would prohibit the state from issuing vouchers to more than 1 percent of the total number of children enrolled in public schools. There are about 1.1 million students in traditional district and charter schools, setting the cap at about 11,000.

To keep that list from expanding even farther, the proposal would prohibit lawmakers from creating new categories. It also would prohibit parents from saving the state funds they get for K-12 education and instead set them aside for college tuition, a practice that now is legal.

And the proposal also requires that any public dollars in vouchers be used in the state.

That is significant, coming the same day the Arizona Senate gave preliminary approval to allow the use of vouchers at schools outside of the state within two miles of the Arizona border.

This is designed to help students living on the Navajo Reservation who want to attend private schools in New Mexico. But as worded it would allow any student to attend any private school just outside the state's border.

Backers have until July 2 to gather 237,645 valid signatures on petitions to put the issue on the November ballot.

Save Our Schools has a track record on this issue -- and their ability to put issues on the ballot. This is the same organization which two years ago got voters, by a nearly 2-1 margin, to override a move by Gov. Doug Ducey and Republican lawmakers to eventually allow any of the state's 1.1 million students in public schools get vouchers.

The problem, according to Dawn Penich-Thacker, one of the organizers of Save Our Schools, is that Arizona lawmakers didn't listen to the results of the 2018 vote and aren't listening now.

"We finally realized they're never going to stop until we stop them,'' Penich-Thacker said. "So the only way to stop politicians from working against the voters is to do a voter-protected initiative.''

Simply put, once voters enact something at the ballot, the Arizona Constitution forbids lawmakers from repealing it or making major changes unless they "further the purpose'' of the original measure. And even then it requires a three-fourths vote of both the House and Senate.

There are about 8,200 students now receiving vouchers, well within the 1 percent of the 1.1 million students in public schools, with a price tag of about $110 million.

"We wanted to find a spot that didn't kick off anyone who's currently in the program but didn't allow massive growth because we want to refocus on the public schools and the funding for public schools that 95 percent of kids are in,'' Penich-Thacker explained. "It's a reasonable limit.''

More significant, she said, is the requirement for the priority to go to students with disabilities -- the original reason that vouchers were enacted in the first place.

"The legislature has never seen fit to take care of special needs students in the ESA program as much as they use them as pawns,'' Penich-Thacker said. She said the change, if approved by voters, will mean that "over time this program serves the students they say it was designed to serve.''

In 2018 Save Our Schools gathered virtually all the signatures they needed with volunteers. But the number needed this time is greater. And Penich-Thacker said her organization does have some funds available but would not disclose the amount or the source at this point.

That information eventually is required to become public.The proposal is provoking kickback from various groups which have supported the concept of vouchers.

"This recent political threat by Save Our Schools falls right in line with their track record of stomping on Native American children, children with special needs, and low-income children simply because these families may choose to pursue education opportunities outside of the public school system,'' said Stephen Smith, state director of American Federation for Children in a prepared statement. "If we truly want what's best for each individual student, then let the parents make that decision, not a partisan lobbying group like Save Our Schools.''

"Arizona already has more school choice than any state in the nation,'' Penich-Thacker countered, noting out that the state has not only open enrollment allowing students to any public school they want but also an extensive network of charter schools, both nonprofit and for profit. She said parents who want something else should not be able to use public dollars.

"It's not an endless aquifer,'' Penich-Thacker said.

"We need more educational opportunities, not fewer, especially for low-income children who have even greater needs,'' said Matt Beienburg, the Goldwater Institute director of education policy in a prepared statement. "We should be working to give them the same access other families have to schooling options, not locking them out from them.''