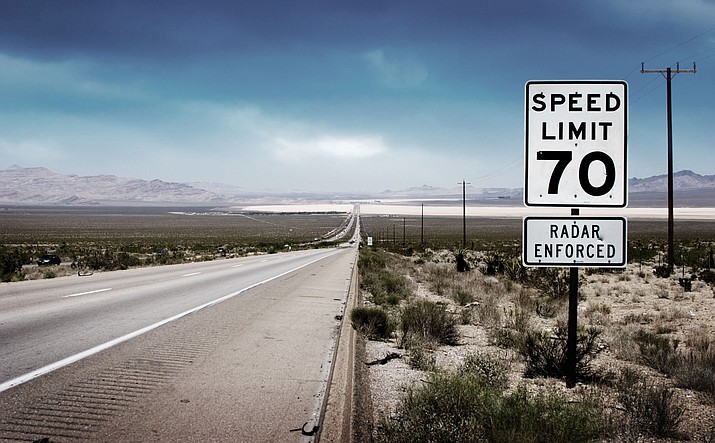 SB 1669 would wipe out civil traffic fines for those who are doing only 10 miles over the posted limit on highways and open roads. Adobe Stock Image

PHOENIX -- Do you see the posted speed limits as more of a suggestion and think it's OK to go a bit faster?

Some state lawmakers agree and are moving to effectively make that the law in Arizona.

The state Senate on Wednesday gave preliminary approval to legislation that eliminates the possibility you could be arrested if you drive faster than 85 miles per hour.

Instead, it says that criminal penalties can be imposed only on someone driving at least 20 miles over the posted speed. And that means no chance of arrest for someone doing 95 out on rural interstates with a 75 mph limit.

Potentially more significant, SB 1669 would wipe out civil traffic fines for those who are doing only 10 miles over the posted limit on highways and open roads.

Put simply, a police officer pulling someone over doing 75 where the limit is 65 could not charge someone with speeding. Instead, the offense would be "the waste of a finite resource,'' presumably gasoline. And the maximum fine could be no more than $15.

There also would be no real reason to fight it: The legislation would preclude the Department of Transportation from reporting the violation to a motorist's insurance company. So there's no danger that the speeding motorist could have his or her premiums increased.

That same rule would apply to roads posted at 75: Drivers could do up to 85 and risk no more than that $15 fine.

Sen. David Gowan, R-Sierra Vista, said there is precedent for what he wants to do.

It goes back to the 1970s and the Arab oil embargo when the federal government told states they had to set maximum speed limits at no more than 55 or lose federal aid. Arizona complied.

In 1980, however, Jim Hartdegen, then a Republican representative from Casa Grande, discovered a loophole.

The state would keep those double-nickel speed limit signs. But anyone going up to 10 miles over could be cited only under the "finite resource'' section.

That effectively restored 65 mph as the maximum speed limit on state highways.

The federal law is now gone and Arizona now has roads posted up to 75 mph. So Gowan said he simply wants to update the state's traffic laws.

"I just don't see raising the ceiling as to how much further you can push the limit,'' he said.

"It's a slippery slope to giving the people behind the wheel that 'get-out-of-jail-free' card to go that much faster,'' Contreras said. "It just makes the roads that much more dangerous.''

The measure needs a final Senate roll-call vote before going to the House.