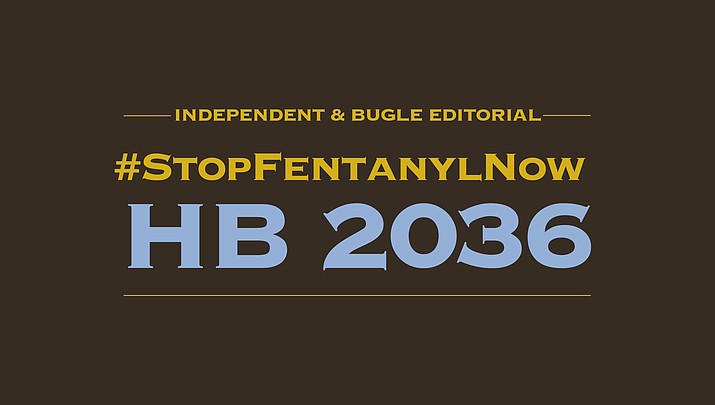 As you read this editorial, a bill is being held on the House floor that would finally make it tougher for drug dealers who keep selling illicit fentanyl to our young people in Arizona, but Democrats -- and a few Republicans -- are not stepping up to support it.

The bill, HB 2036, would require mandatory prison sentencing for dealers caught selling this deadly poison in large enough amounts to distinguish them as significant drug traffickers. Such mandatory sentences are already in place for meth dealers, but in most cases current state law allows fentanyl dealers to walk away and continue to spread death for money.

HB 2036 targets only predatory dealers of fentanyl, carfentanil and fentanyl mimetic substances, the most dangerous and lethal illicit drugs killing Arizona residents. With its minimum threshold amounts, the bill does not target their victims, or users selling small amounts to support a habit. Drug users need help, and the law has allowed this for 20 years. But profit-making fentanyl dealers face little consequence in Arizona. Even if they are caught, they go home with probation to sell another day while families continue to bury sons and daughters.

Street fentanyl is a hidden death like no other drug. Partners Against Narcotics Trafficking (PANT) reports nearly 70 percent of all its fentanyl arrests involve mimic pills that look like typical, less potent prescription drugs such as the painkiller Oxycodone. The Drug Enforcement Administration reports that the United States is in the midst of a fentanyl crisis, as traffickers are flooding the drug market with these counterfeit prescription pills laced with fentanyl.

A typical grain of sand weighs 11 milligrams. This is enough fentanyl to kill 3 people -- and it is killing, right here in our county. Fentanyl dealers know they are selling poison, but they keep trafficking the drug over the border from Mexico or from China because Arizona is an easy mark.

Fentanyl is 80 to 100 times stronger than morphine, or about 50 times more potent than heroin. Some compounds are even stronger. Because of its high potency, it is even hazardous for our law enforcement officers, as a lethal dose can be accidentally inhaled or absorbed through skin contact.

Under current Arizona law a person selling fentanyl does not face mandatory prison time unless the value of the drug reaches a threshold amount of $1,000. Depending on the market, fentanyl pills can be valued between $2 to $20 a pill. At $10 a pill, a dealer would need to be caught with 100 pills before they would face mandatory sentencing under current law -- enough to kill 100 people. For perspective, a dealer with just one pound of fentanyl powder can produce one million pills.

Opponents of mandatory sentencing have spread false rumors that our jails are filled with drug offenders. But the truth is, drug dealers are not being held accountable. According to the latest Arizona Corrections report, drug sales and trafficking constitutes only 11.5 percent of the state prison population. What kind of message does it send to drug dealers when the law mandates prison for meth dealers selling any amount, but fentanyl dealers selling less than 100 pills get probation?

HB 2036 is sometimes referred to as the “Bundrick-Morales Stop Fentanyl Bill.” These names represent two Prescott area teens who died because a dealer sold them fentanyl mimic pills disguised as Percocet. They also represent an estimated 650 Arizona residents who died from fentanyl in 2018. This bill will hold fentanyl traffickers and manufacturers accountable with real consequences but still allow flexibility for prosecutors. HB 2036 is not only about more balanced justice for surviving family members, it’s also about saving young lives.

Please tell our lawmakers it’s time to shut down predatory fentanyl dealers who knowingly peddle this deadly poison. We must act to #StopFentanylNow.