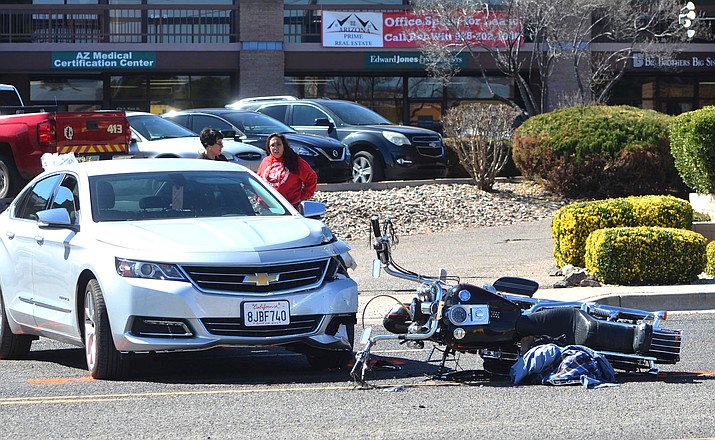 A fatal collision occurred Thursday in the 700 block of South Main Street at about 11:35 a.m. 62-year-old Cottonwood man was killed in the collision. VVN/Vyto Starinskas

COTTONWOOD ̶ A Los Angeles woman failed to yield from a private drive in Thursday’s fatal car-motorcycle crash in the 800 block of South Main Street, according to the Cottonwood Police Department.

A Friday news release from Cottonwood PD Commander Gareth Braxton-Johnson states Maria R. Christensen, 67, “made a left-hand turn on to South Main Street. While driving to merge, and turn to go north on South Main Street, she struck the decedent,” Marty Weston.

Weston, the news release stated, “was travelling southbound on South Main Street, with the normal flow of traffic.”

Weston was a 62-year-old Cottonwood resident.

No citations or arrests were made at the scene, said Braxton-Johnson.

“As previously noted, the accident investigation will be forwarded to the appropriate court of jurisdiction to determine if any civil and/or criminal charges are warranted,” Braxton-Johnson said in the news release.

According to a Thursday news release, “Upon arrival, emergency medical services personnel were already performing life-saving measures on the motorcycle rider.”

Shortly thereafter, Weston was rushed by ambulance to Verde Valley Medical Center, where he passed away a short time later, Cottonwood police said.

Police said Weston was not wearing a motorcycle helmet.

Police said there were no signs of impairment detected on either of the drivers at the scene.

South Main was closed in both directions for almost two hours between South Camino Real to South Villa Street.

“This is an unfortunate, and tragic reminder that everyone who operates a motor vehicle on our roadways needs to be mindful of the hazards and inherent dangers associated with vehicular travel. The awareness we must all have, must account not only for our own driving behavior, but also for other motorists as well, that sometimes demonstrate unpredictable behavior. Traffic safety is everyone’s responsibility, and we all play a role,” said Commander Braxton.