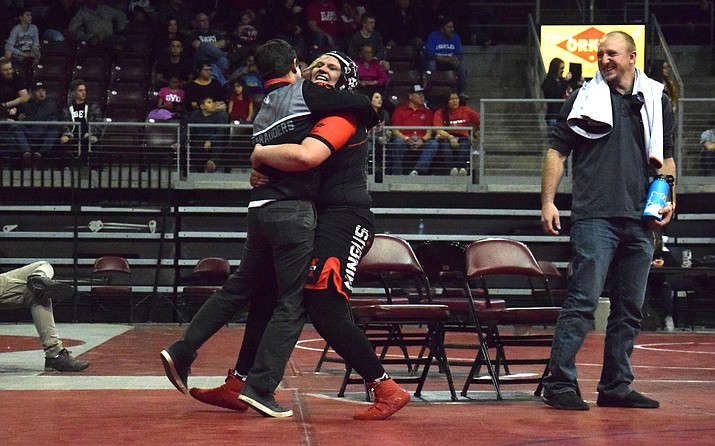 Mingus Union senior golfer Noah Daher qualified for the state tournament for the second year in a row, a rare feat for MUHS golfers.

Daher was 44th at the state tournament at Omni Tucson National after finishing 75th in 2018 when one of the two days was rained out.

The Marauders and Vols split the season series but LW won the tied breaker due to their superior 4A record.

Mingus Union softball enjoyed one of its best seasons in years, reaching the third round of the state tournament unscathed.

The No. 4 Marauders fell to eventual state champion Tucson Salpointe Catholic and to Bradshaw Mountain after opening the tournament with wins over Tucson Sahuaro and Casa Grande Vista Grande.

DeVore had originally hoped to implement it by January but it has been delayed to the fall if they chose to do it.

For the first time since 2015, Mingus Union sent a full cross country team to state.

The Marauder girls finished ninth at the state meet.

On the field the Marauders went 0-10, their worst record since at least 2004. Off the field, second-year head coach and Mingus Union alum Robert Ortiz was suspended and his contract was not renewed.

Mingus Union swimming had another state meet to remember.

The Marauder girls finished 10th and the boys 15th. Senior Emma Warner the 100 breaststroke championship, after entering the meet first and finishing first in the prelims.

She finished fifth in the individual medley. Andrew Peterson finished ninth in the 50 freestyle and set a school record.

At the state meet in Mesa, Meg Babcock defended her 400m championship, anchored the state champion 4x400 team and took second in the 200m.

Kendrew Streck won the discus and the shot put, repeating as champion.

The girls finished sixth and the boys ninth in the state.

Schulz finished the season 17-0 won most of those by pin.

The first girls wrestling tournament did not have different divisions, it crowned one champion per weight class.