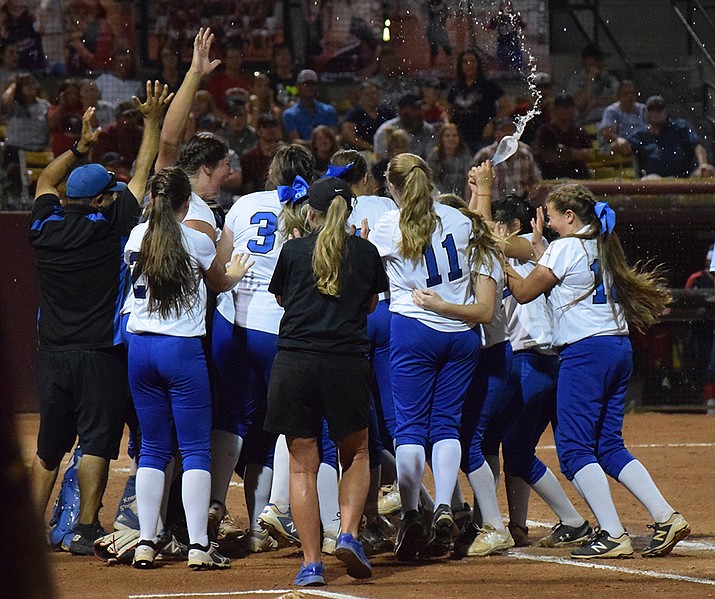 Camp Verde girls soccer closed out the regular season winning four of their last six to reach the postseason.

The Cowboys upset then No. 3 Lakeside Blue Ridge 1-0 on senior night to bolster their résumé.

Senior defender/midfielder Alondra Fowler scored the game winner off of a free kick.

Camp Verde girls basketball knocked off Eloy Santa Cruz Valley 68-40 in the state play-in to advance to the state tournament for the 13th straight season.

CV also went 3-0 to won the Central Region tournament. The Cowboys lost to Scottsdale Christian 37-27 in the first round of the state tournament.

Holdgrafer took third in the 100m hurdles and ninth in the 300m hurdles. He was fourth in the triple jump with a PR and 21st in the javelin.

As a team the Camp Verde boys finished tied for 15th.

Camp Verde football finished the season on a high note.

The Cowboys comfortably won the region, going 11-1 and then won both of their region tournament games at home. Camp Verde knocked off Glendale Prep 60-44 to avenge their sole Central loss of the regular season.

No. 5 Camp Verde baseball knocked off No. 4 Thatcher 7-4 in the state quarterfinals to reach the semifinals.

The Cowboys jumped ahead 4-0 in the first inning and after Thatcher tied up, scored three in the seventh inning to move on to the state final four.

After winning the Central Region, Camp Verde boys soccer reached the state semifinals for the first time since 2016.

Although there were young, they are expected to return 27 players for the 2020 season, the Cowboys beat rival Show Low 2-1 in the state quarterfinals.

Cowboys move on up

After their enrollment rose from 497 to 553, Camp Verde moved up to 3A in most sports.

The Cowboys will compete in the 3A North Central starting in the fall in volleyball, basketball, baseball and softball. Football and soccer will remain in the 2A while track and field and cross country will move up to Division III.

Despite offseason turmoil, Camp Verde wrestling continued their tradition of success at the state meet.

The Cowboys trailed No. 1 and defending state champion Benson 6-2 before scoring eight runs in the seventh inning.

Benson was riding a 17 game winning streak and beat CV in the 2018 state championship game.