Baby giraffes find new home at Out of Africa 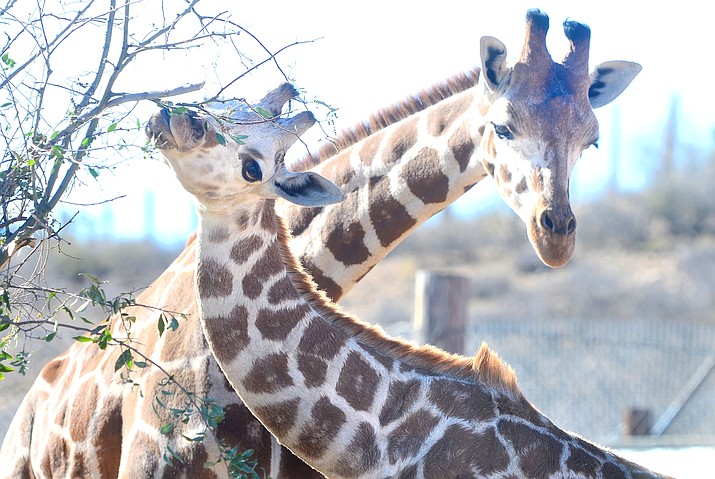 Temba and Mawenzi step outside in the Camp Verde sunshine at Out of Africa for the first time on Thursday. VVN/Vyto Starinskas

OUT OF AFRICA WELCOMES BABY GIRAFFES by Verde News

CAMP VERDE -- Temba and Mawenzi stood outside their heated barn and looked out at the Verde Valley sunshine for the first time Thursday.

The two young giraffes had just made the long 26-hour trip from Ohio Saturday and this was their first chance to run around in their new coral.

Nine-month-old Temba peeked his long neck over his new neighbor’s fence and gazed at Gabriel and Journey, two rescue tigers from Phoenix.

Meanwhile, 6-month-old Mawenze stood frozen while listening to lions howl from the distance over the hill.

The two giraffes will eventually be moved from their coral and join compatible animals in the Serendipity section of the park.

Out of Africa went on the difficult and expensive search to find a new giraffe, after the park’s wildly popular giraffe, Kibo, died in August.

Thanks to fundraising and a GoFundMe Page, they got the two young giraffes this past week.

The new giraffes will join a wild animal park which is known for its kissing giraffes, which includes an older giraffe named Pilgrim.

“Giraffe kisses” occur when the giraffes grab treats such as celery from visitors’ mouths on tour buses.

The park is fortunate because these two young giraffes were not separated when they left Ohio, and they came together, explained Ashton Powell, Out of Africa spokesperson.

“The little ones got a buddy, He’s got a pal.” They have the same father, but different mothers, she added.

Safari tour buses are viewing the giraffes during limited periods during the day beginning Thursday.

Powell said people contributed about $25,000 through the GoFundMe page, donations at the park and mail donations to pay for the giraffes’ transportation and hoof chute.

The park invested in a large, expensive steel chute for a giraffe to be enclosed in while they are treated by a veterinarian, she said

The park had to spend the $25,000 and “then some” for the two giraffes and expenses, she said. The fundraising will continue to pay for the additional costs.

“They were really excited to get outside,” explained Courtney Harwell, park employee who works with the giraffes. “They came right over the tree and started eating which is ideal.”

Right now people can see the new giraffes on the safari bus, but Harwell thinks park visitors will eventually be able to feed them and even get kisses. She said it’s all dependent on their behavior and level of comfort.

Pilgrim and Kibo made Out of Africa popular with kisses, which led to T-shirts and fundraisers.

But Kibo’s sudden death last August caught the park off-guard, so they vowed to remember his legacy and try to get another giraffe.

“It doesn’t take away the loss,” Powell said. “But it definitely gets everybody excited,” referring to the new addition to the Out of Africa family.

Fundraising for baby giraffe approaches $20K
Gone but not forgotten: Giraffe at Out of Africa dies
Out of Africa's Serengeti area receives animals<br><i>Park takes major step toward public preview</i>
An antelope is born
Walk on the Wild Side