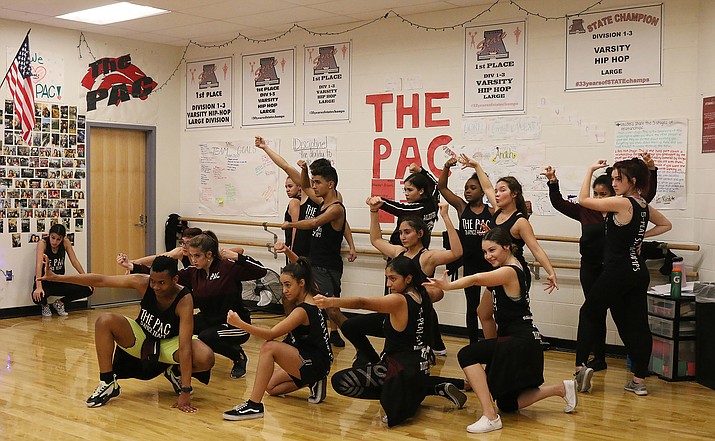 The PAC dance team at Walden Grove High School in Sahuarita practiced their Avengers performance. It first performed this dance during a homecoming show in September. (Photo by Cassidy McCauley/Cronkite News)

SAHUARITA – Whether it’s following the yellow brick road, capturing the golden snitch or saving the world from Thanos, a performance by the Walden Grove High School Performing Arts Crew is destined to go viral.

The PAC’s last three homecoming shows – honoring The Wizard of Oz, Harry Potter and The Avengers – have combined for over 19 million views on YouTube. The team’s Harry Potter routine alone has 12 million views.

The dance team has won five consecutive division titles in varsity hip hop, performed on “Good Morning America Day” and made it to the quarterfinals of “America’s Got Talent.”

How does a relatively unknown community, 15 miles south of Tucson with the backdrop of the Santa Rita Mountains and a population of approximately 28,000, find such success? Most around the program credit its dance teacher and coach, Kristi Lopez.

“One thing that I would want people to know is that our coach is behind everything,” senior dancer Kayla Brown said. “They see us in our dance videos and they see us perform, but we couldn’t do it at all without our coach.”

Lopez was brought in as the dance teacher for Walden Grove, the second of two public high schools in Sahuarita, when it opened in 2011. After dancing professionally in Florida and Italy, she formed the PAC during her first year teaching at the school.

Early on, laying the foundation for a dance program was hard. The PAC was the first competitive dance team in the Sahuarita Unified School District.

Challenges are a common theme for this program. Despite its viral homecoming performances and five dance titles, the team does not receive funding from the school. Yet it spent nearly $4,600 on paint, props and costumes for its Avengers performance in September.

“We get nothing. So every year on top of everything that the team’s doing, we have to fit in fundraising hours and activities, Lopez said. “And we do that on Saturdays or Sundays or really late at night after practice.”

Lopez and her team do a bevy of fundraisers throughout the school year, from car washes to bake sales to an end-of-the-year dance showcase. The money that is raised goes to performances, travel expenses and anything else that is needed.

Walden Grove Dance by inside380

Although Lopez has been building the program for almost a decade, her team did not receive national recognition until recently. Last year, the team was invited to audition for the 13th season of “America’s Got Talent.”

The invitation came after receiving millions of views on YouTube for its Wizard of Oz performance. A performance which included a set that took four months of nonstop work to build, Lopez said.

Months later, the team flew to Pasadena, California, in March to audition in front of the judges. The team performed a “Charlie and the Chocolate Factory” themed dance during the quarterfinals before being eliminated.

Recognition didn’t stop there. Last year’s homecoming theme was “Harry Potter” and the performance that followed ended up being the most popular of all the team’s viral performances. PAC’s Harry Potter dance has almost 12.2 million views on YouTube. As a result, the team was invited to perform on “Good Morning America Day” in Times Square on the show’s Halloween edition.

Lopez is a huge Harry Potter fan and described putting together the choreography as “really cool” and “exciting.” She has seen every Harry Potter movie.

Marvel on the other hand ended up being much more difficult to put together.

“Marvel was really hard for me,” Lopez said. “I’ve never seen any of the movies at all.”

Storyboarding, coming up with props and set designs were hard. She made full use of her resources.

“I used ‘CliffsNotes,’ I used friends, I was asking people what happens next,” Lopez said. “I had a bunch of alumni help me storyboard. My storyboard was six pages and we had a meeting where a bunch of people came in and explained it to me (the Marvel Cinematic Universe).”

September’s Avengers dance and set took over two months to prepare as they constantly built different parts of the set every day during that time period.

When Lopez was hired to teach and start a dance program at Walden Grove, it lacked a space for her to hold class. So, the school made a dance room. During the summer before the school opened up, construction workers helped convert a storage room into a dance room for Lopez.

The room is barely big enough to fit all of her dance students. When the PAC has to prepare for bigger performances such as Harry Potter or the Avengers, it practices routines in the courtyard. Despite the challenges, Lopez’s dance room is a place where students feel they can express themselves without judgment.

“When I walk into the dance room,” Brown said, “I just forget everything else that’s going on. And I just focus on dance, and it’s really nice. It’s definitely an escape from high school.”

Lopez has created an atmosphere where dancers feel comfortable and do not worry about the pressures of being a high school student.

“This room is a safe space,” senior Quincy Harmon said. “So like for anyone, if they feel like they don’t have anyone to talk to, they can always come in here and talk to the team.”

Because of the diversity of her students, Lopez uses her class as an opportunity for them to express their individualities through dance.

“I like to use the class to let them be vulnerable and allow them to become their true selves in class,” Lopez said. “Dance doesn’t show any judgment, it shows no prejudice … it’s just inviting to everybody.”

Lopez encourages her students to be leaders in school. A lot of the members on the team are eager to show freshmen their classes on the first day of school.

“She teaches us to always be kind to others to always be compassionate, to always lift others up and to just be a shoulder for someone to cry on,” Harmon said.

This past year, the PAC won its fifth consecutive varsity hip hop title, a feat that is even more impressive considering that most of the dancers on the team did not have any dancing experience before coming to Walden Grove.

“I don’t have any feeder schools, so when they come as freshmen, they don’t know anything,” Lopez said. “So every single year, I’m starting over teaching them how to dance. And it’s really hard.”

At Walden Grove, students start out in beginning classes, then move on to intermediate before having the opportunity to join the dance team.

“I joined the team freshman year and everything I learned was from Miss Lopez,” Harmon said. “I didn’t know how to dance. I had a little rhythm, but she really helped mold me and grow me into the dancer I am today.”

This past summer, Harmon attended a three-week summer program at the Joffrey Ballet School in New York City. The same company Lopez received training from when she was in high school. A program that he would not have had the courage to audition for if it were not for Lopez, Harmon said.

Assistant coach Amber Detamore graduated from Walden Grove High School in 2015. She returned last year to help Lopez coach the dance team, a position she wanted to hold in part because of her close relationship with Lopez.

“I consider myself fairly close to Ms. Lopez,” Detamore said. “She’s done a lot for me … and I like watching her be a leader, how she runs things, how she handles certain situations, the good and the bad, and I hope to be as good of a role model as she is to others one day.”

Part of leading for Lopez is using dance to teach lessons that will last a lifetime.

“I just know that 20 years from now they’ll be successful in whatever they do.”