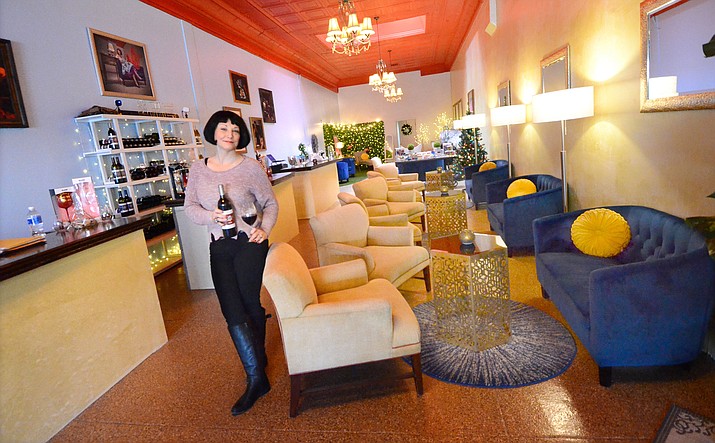 Brighid McLoughlin shows off one of her Tantrum Wines in Cottonwood in her newly designed tasting room. VVN/Vyto Starinskas 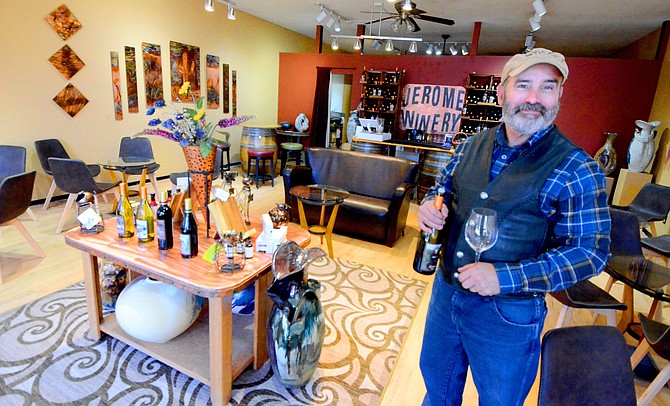 Tony Lyle will tell you about the wines at the Original Jerome Winery in Jerome in their new location. VVN/Vyto Starinskas

The phenomenon of the Verde Valley becoming the mini-Napa Valley of Arizona does not seem to be fading as two tasting rooms have popped open in Cottonwood and Jerome recently.

Like a new bottle of wine, each has its own story to add to the more than 30 tasting rooms on the Verde Valley’s Wine Trail.

The tasting rooms have congregated the this small Northern Arizona region, but many of grapes are grown in Southern Arizona - as in the case of new Tantrum Wines tasting room in Cottonwood and the Original Jerome Winery in Jerome.

Tantrum Wines in Cottonwood is managed and operated by Brighid McLoughlin, whose husband John McLoughlin owns the Dragoon Mountain Vineyard in Willcox, the largest in the state.

McLoughlin also owns the Original Jerome Winery and the Winery 1912 in Sedona.

Brighid said she started on the ground-floor at the vineyard learning how to make wine and it was her dream have her own line of wine and tasting room.

“Being a small family owned business with no investors and her need to craft a quality wine as a female winemaker meant the realization of that dream was slow and tough,” she explains on her webpage.

“Tantrum Wines reflect the moods and attitudes of women who move with a purpose.”

Sedona has a focus on Spanish-style wines, wines that tell the story of Arizona’s wine history, she said while lounging in her new tasting room on Main Street in Old Town.

At the Jerome tasting room, they focus on traditional single varietal grapes and exotic grapes that not a lot of people are familiar with.

John McLoughlin’s original tasting room in Jerome was on Clark Street and opened in 2001 making it one of the first in the Verde Valley, she said.

The Tantrum in Cottonwood opened in October and Brighid described the feel of the tasting room as “definitely feminine,“ she continued. “The space is about community, about freedom.”

All the seating areas are round and open because she wants people to gather and explore her wines.

Brighid said her daughter Kelsey Potter designed the tasting room which she described in the style of Holly Golightly’s apartment in Breakfast at Tiffany’s.

“Enjoy the space, feel free, be creative,” she said. “Wine is about moments in time, friendships and memories.”