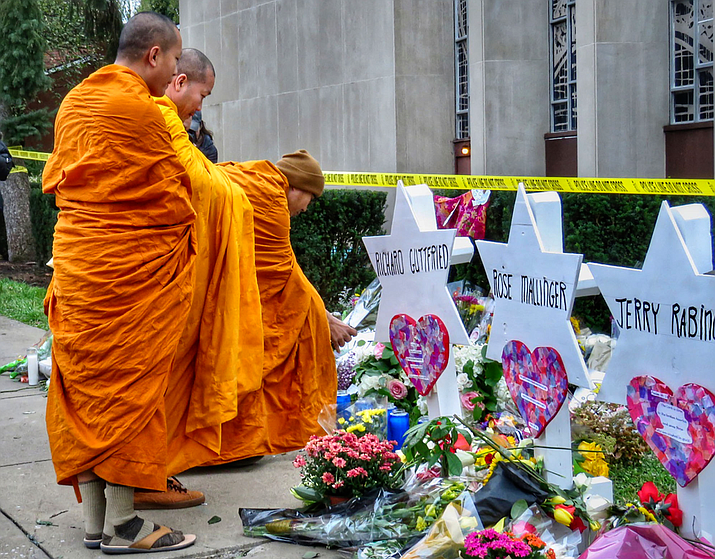 Buddhist monks pay their respects at a shrine to some of the victims in the October 2018 shooting at the Tree of Life Synagogue in Pittsburgh. The FBI said hate crimes, nationally and in Arizona, were down in 2018, but advocates noted that violent crimes that were bias-driven had risen that year. (Photo by Cam Miller)

WASHINGTON — Reported hate crimes in Arizona fell to the lowest rate in five years in 2018, a drop that outpaced a slight drop nationally, according to the most recent data available from the FBI.

But advocates cautioned against celebrating too soon, noting that “reported” is a key element when it comes to hate crime data. Many such crimes go unreported due to distrust of law enforcement or ignorance on how to report a crime, said the regional director for the Anti-Defamation League of Arizona.

“One of the most important things to remember is that we’re talking about hate crimes that have been reported,” Carlos Galindo-Elvira said. “We don’t know what crimes happened that were not reported and, specifically, who they impacted.”

The FBI’s Uniform Crime Reporting Program showed that 166 hate crimes were recorded in the state in 2018, down from 264 the year before. That’s the fewest since 2013, when 155 cases were reported in Arizona.

The FBI defines hate crime as a “criminal offense against a person or property motivated in whole or in part by an offender’s bias against a race, religion, disability, sexual orientation, ethnicity, gender, or gender identity.”

Race and ethnicity remained the most common motivation in Arizona, accounting for 57% of all hate crimes in the state last year and more than half in each of the last five years, according to the FBI. They were followed by sexual orientation and religion.

The majority of reported hate crimes occurred in Phoenix, where the FBI data show 112 such crimes were reported for the year, followed by Tucson with 18, and Glendale, Scottsdale and Yuma each reporting a handful.

Of the 17 Arizona cities that reported hate crimes in 2018 – accounting for just a fraction of police agencies in the state – 13 reported fewer than five such incidents, with seven cities reporting just one bias-motivated crime for the entire year.

The numbers can vary slightly, as a single incident with multiple motivations may be counted differently. Phoenix, for example, reported just 107 incidents last year, compared to the 112 the FBI cited in the city – a number the city had already matched through the first three quarters of 2019, according to the police department’s statistics.

A spokesman for the Phoenix Police Department said it places a high priority on awareness and reporting of hate crimes, while conceding that not all are likely reported.

“We don’t want it to happen, but if it’s something that’s happening, the community needs to report it so we can follow up on those matters,” Phoenix Detective Luis Samudio said.

He said the department has 12 outreach groups that target specific communities, focusing with them on hate crime education and awareness, and a three-person unit designated to investigate incidents.

Samudio said many individuals often do not report bias-motivated crimes because they do not believe they have been targets of hate.

“These things, unfortunately, do occur but we at the department are doing the best we can and investigating these matters,” he said.

Sgt. Lori Franklin, a spokeswoman for the Yuma Police Department, said her community’s proximity to the border plays a role in its reported numbers.

She said the majority of hate crimes in Yuma are gang-on-gang incidents. With the “incredible” number of undocumented people coming over the border in recent years it has made for “two sides battling” in the community – those for and against increased immigration.

“I’m very happy with our numbers compared to what they could have been,” said Franklin. “I would hope it continues to go down.

“I would hope all crime continues to go down, but we know realistically that’s not going to happen,” she said.

“A president’s words have consequences, and this administration continues to normalize the bigotry that motivates hate crimes,” she said in a prepared statement.

“We know that we’re certainly in a politically charged environment where there are emboldened groups – extremists and white nationalists – that are promoting their ideology that is counter to a society that is diverse and appreciates diversity,” he said.

Despite the overall decline, Galindo-Elvira said the rate of hate crimes is still “alarming.”

“I would say that one hate crime is too many,” he said.