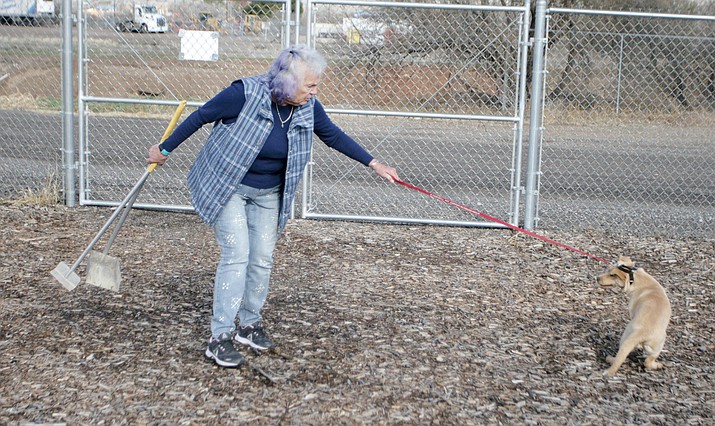 Pat George volunteers with the Camp Verde animal shelter on Industrial Drive. Wednesday, town council will consider decreasing the amount of days a stray dog is kept at the shelter before it goes up for adoption. VVN/Bill Helm

CAMP VERDE — Wednesday, the Camp Verde Town Council will consider a change to how long the town’s animal shelter holds stray dogs before they become available for adoption.

The Camp Verde Marshal’s Office would like council to approve a proposed change to Town Code 6-1-12, Sections E.2 and E.3 that would decrease the number of days licensed dogs would be held before they are placed for adoption from seven to five.

According to the proposed changes, the number of days unlicensed dogs would be held before they are placed for adoption would decrease from five to three.

“Most people who lose their dog who want the dog back are making all the contacts and efforts possible to get them back,” Town Manager Russ Martin said.

Not shortening the time dogs are kept at the Camp Verde shelter “puts more pressure on the volunteers,” Martin said.

Martin also said that the proposed schedule would make it easier for the town’s animal control department, which includes an animal control officer and volunteers, to feed, walk, and care for the dogs while at the town’s shelter on Industrial Drive.

Camp Verde Marshal’s Office is negotiating a new contract with the Verde Valley Humane Society – VVHS. According to council’s Jan. 8 agenda, VVHS has asked the Town of Camp Verde to change its town code “to be consistent with the other communities for holding stray dogs to make it easier for them to process the dogs we send them and get the dogs available for adoption sooner in order to save them money relating to food and care of the animals while they are in their care.”

The change in code, according to the agenda packet, would allow the humane society to move animals out of its shelter quicker “as well and into new homes and families for the best care of the animals.”

One responsibility of the town’s animal control unit is to contact the owner of a stray dog “immediately after a stray dog is picked up, which is in accordance to town code,” the agenda packet stated.

Camp Verde animal control has a chip reading device and scans all dogs without collars as soon as they are picked up, so the owner can be notified about the lost dog.