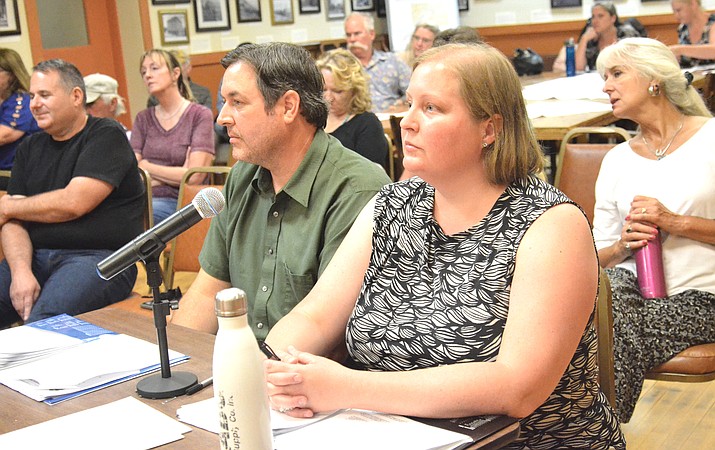 JEROME -- The owners of the Cuban Queen are taking a second shot at the Jerome Planning and Zoning Commission Wednesday night in an attempt to get approval to rebuild the former bordello building, this time into a three-room boarding house with retail space.

The Queen crumbled into a pile of bricks several years ago and was purchased by local couple Windy Jones and Josh Lindner.

The owners have been told by the town they don’t have valid parking permits to convert the one-time brothel into the rooming house. On-site parking is required for new businesses, but the property is too small.

The owners originally came in last year for a permit, but the request was tabled until they could work out a solution with the town about finding parking spaces in town to fulfill the requirement.

Since then, the town has been working on a solution that would allow businesses like the Cuban Queen to open without on-site parking. If the so-called “Overlay District” ordinance is eventually passed, the Cuban Queen and possibly other businesses in the town’s C1 District will be able to purchase parking spaces from the town.

The fees would go to developing and building more parking spaces, explained Jerome Zoning Administrator John Knight. He said he did not know how much these spaces would cost at this time.

Businesses also have the option of purchasing parking spaces from private individuals, but these are limited and expensive.

Jones and Lindner are requesting a conditional use permit site plan review for a mixed-use commercial building.

They are also requesting a conditional use permit to allow a boarding house/rooming house in the C1 zone.

“A boarding house is like a hotel, but it has in this case, three rooms, and they will share a common kitchen,” Knight said Monday. The best way to look at it is that it’s retail with a little boutique hotel, he said. The rooms will be short-term rentals.

One of the requirements of the P&Z approval is that the Cuban Queen secure six parking spots.

Since their zoning request was tabled the first time last year, the town has been working with the owners to allow them to purchase parking spots from the town through the Overlay District.

The Queen’s owners do not know yet how much those parking permits will cost, Knight said, because the ordinance is not passed yet and the cost of creating parking spots has not been determined.

The Cuban Queen is applying to the P&Z with a memorandum of understanding with the town that they will have to purchase parking spots from the town, or secure them from private individuals.

The Overlay District ordinance has a ways to go and won’t be finalized until spring, Knight said. “We’re working on it,” adding that it also has to go through P&Z and the Council.

Knight said more property owners were interested in belonging to the Parking Overlay District, but that this was a pilot project and that the town would need more spaces. They could look at adding businesses to the district, maybe in a year, he said.

The Cuban Queen site-plan review will be addressed and voted on by P&Z, Knight continued, the Design and Review Board have to approve colors, materials, windows, doors and design type of the property, and the Council will have to vote on the Conditional Use Permit to allow residential in the commercial zone.