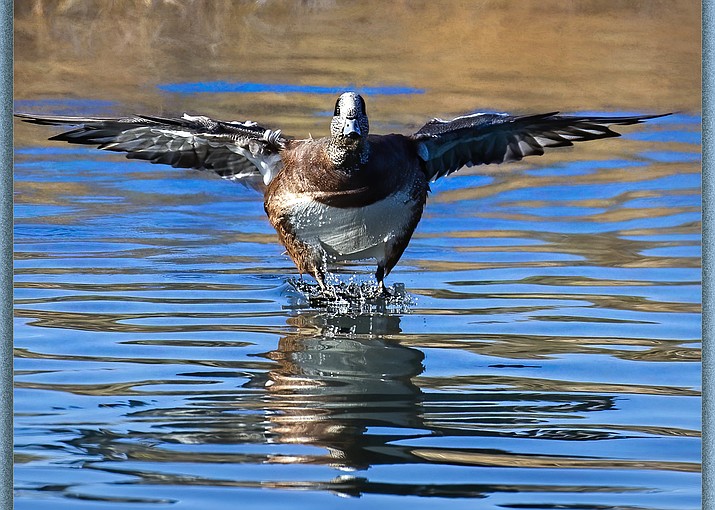 I got this shot of a drake Widgeon just touching down at Bubbling Ponds this afternoon; wings extended and flattened to reduce lifting forces and swinging them down and forward to use as air brakes which along with the friction of the water gets him down into the water and at a stop fast.

Fun getting the head on view rather than the side and from behind views which are the most common shots. It was a beautiful day and since they were feeding the fish in all of the ponds while we were down there, the ducks were flying from one pond to another with frequency trying to get the food before the fish could get it. A great way to get the week off to a start.

Canon has just announced the new 1DX MK III and of course mine is pre-ordered. Some of the features that are pretty exciting are the shooting speed in raw … 16 frames per second utilizing the mirror and 20 frames per second in live mode, a very improved auto focus system and a dedicated processor for that function.

Many other improvements and I’m expecting this to be a camera body I keep for a very long time. I bought the first in the series nearly eight years ago … it was a fantastic camera then and it still is today; I took the shot tonight with my 1DX purchased in June of 2012. Anyhow, it is a pretty exciting new camera and hoping to have my hands on it within a month … maybe two. If you are interested in camera gear I highly recommend District Camera and you can reach them at: www.districtcamera.com … I have bought nearly all of my camera gear from them for over fifteen years.

Sleep sweetly now that the gates of the crimson night are closed,

and leave tomorrow’s struggle for tomorrow;

The earth is peaceful, only the stars and still moon are abroad, and they wage no war.