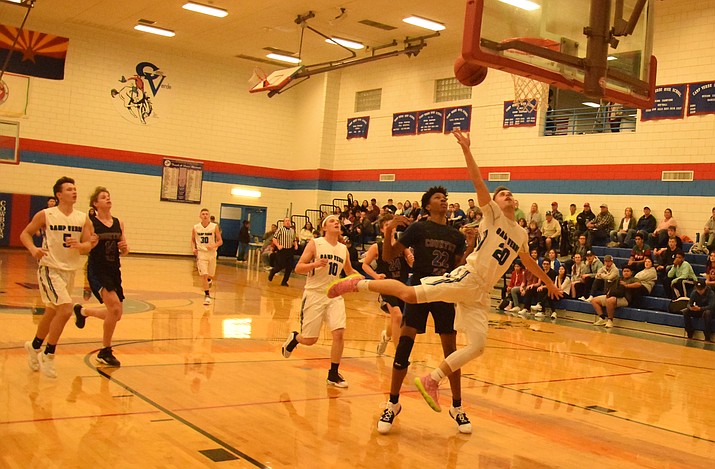 Camp Verde senior Jason Collier lays the ball up after getting fouled during the Cowboys’ 66-50 win over Phoenix Country Day at home on Wednesday night. He made the free throw to complete the three point play. VVN/James Kelley

“We played pretty well (Wednesday) night, I was pretty pleased with our effort,” CV head coach Daniel Wall said. “With the full court pressure, I was happy with how the guys trapped and rotated out of it. I thought we executed some things in the half court pretty well and they played really hard. They competed well, so I was pleased with that.”

It’s the Cowboys’ first game since the initial rankings of the season were unveiled on Tuesday. CV was No. 14 in that first ranking.

“It’s a big win, any time you beat a team like Country Day, who’s a really good team, that is a big win,” Wall said. “It’s early in the season, so there’s a lot of games still to be played and a lot of flip flops in the rankings still to happen, so I don’t take a whole lot of stock in that but certainly they’re a tough team and our guys played well (Wednesday) night.”

Camp Verde jumped out to an 18-4 lead after the first quarter and didn’t hold up until the end of the game when Wall emptied the bench and the Eagles cut the deficit from near 30 points.

Senior shooting guard Jason Collier led the way with 32 points, including 8-for-8 from he free throw line. He had seven rebounds, two assists and a steal as well.

“What I was pleased with with him was he didn’t settle for a lot of outside shots,” Wall said. “He really worked to get in the paint, attack the rim, he was 8-for-8 from the foul line, which is what we want him to do, is just get inside and attack and he found guys and made some really nice plays with his passing and what I was also pleased with was his defense. He competed hard on the defensive end (Wednesday) night, which was great.”

During the winter break, the Cowboys hosted Yvonne Johnson Memorial Tournament, going 4-0. The Cowboys opened with a 72-48 win over Pinon, then knocked off Chino Valley 63-46. Then in the knockout stage beat Parker 88-72 and Chino Valley again 66-50 in the championship game.

“The tournament was good, we ended up beating Chino in the championship game,” Wall said. “Started out a little bit sluggish game one and played a little bit better game two and then day two we had Parker and in the semis and then Chino in the finals and just competed pretty well that second day and were able to knock off Chino at the end, who has a really good team this year as well.”

The wins over the Cougars avenged the Cowboys’ lone regular season loss, 69-67 at Chino Valley in the season opener.

“It’s always fun when you play a team and lose to them initially, it’s fun to have a second chance to be able to compete,” Wall said. “We knew we’d have to play pretty well to beat them the next time out because they got the one kid who can really shoot and they got their two bigs inside that are tough but yeah the kids were really excited about the challenge and responded well.”

The Cowboys are 6-1 in regular season games, which count in the rankings, unlike tournament games.

Camp Verde travels to No. 22 Sedona Red Rock on Friday for a game at 7 p.m. Then the Cowboys host No. 47 Valley Lutheran in their next home game on Tuesday at at 7 p.m.