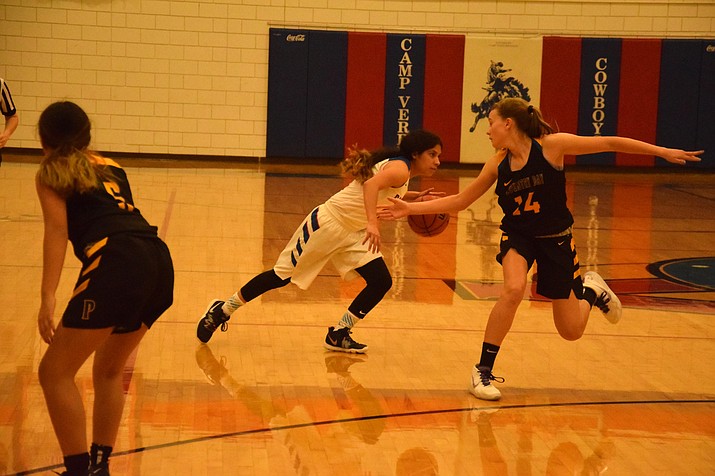 Camp Verde High girls basketball used a strong second half to comfortably win their ninth straight, this time over a top eight foe.

“In the first half we started out pretty strong and really fizzled in the second quarter,” CV head coach Mark Showers said. “We made a couple of adjustments at halftime and them came out like gang busters in the third and fourth and really played excellent basketball. Both offensively and defensively. One of the things that has been beneficial to us is we’ve had at least three or four players regular in double figures, which helps on the scoring end and makes it very difficult for the other team to be able to defend us.”

“Oh this is a big win,” Showers said. “They’re ranked in the top 10 and we were a little nervous coming in because we’ve seen some film on them, they can shoot the ball, they can handle the ball but they didn’t have an answer for Jacy.”

The Cowboys debuted at No. 6 in the first rankings of the season, released Tuesday.

“The early rankings don’t really mean a whole lot, you have to start winning in your region and we have one of the best teams in the state in our region, Valley Lutheran, so it’ll depend on how well we play against them,” Showers said.

The Cowboys had a happy holidays, going 4-0 in their invitational, the Yvonne Johnson Memorial Tournament. They opened with a 59-26 win over Chino Valley, then beat American Leadership Academy - Ironwood 72-53.

On the second day they beat Horizon Honors 51-22 and then Williams 68-55 in the championship game.

“The tournament went great,” Showers said. “Both boys and girls teams won. It’s a great bridge for the kids from the first half of the season to the second, it gives them four solid games in the middle of that two-week break and it was well attended, lots of people came and watched the games. Our parents were absolutely phenomenal taking care of the gates and the concession stands, so it was just a great, great tournament for the entire program overall.”

Camp Verde travels to No. 16 Sedona Red Rock on Friday for a game at 5:30 p.m. Then the Cowboys host No. 5 Valley Lutheran in their next home game on Tuesday at at 7 p.m.