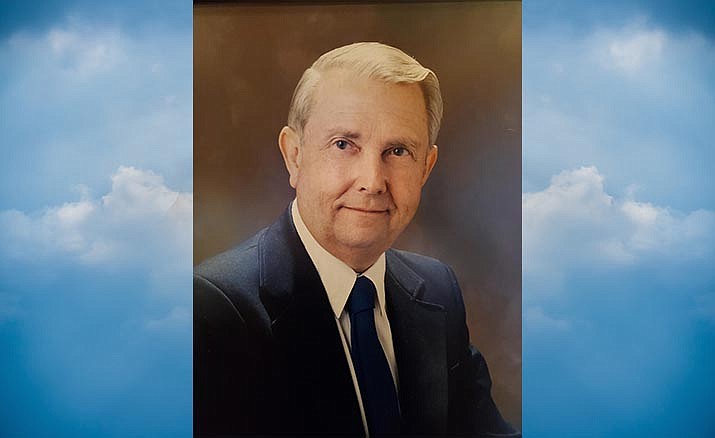 It is with the deepest sorrow imaginable that we announce the passing of our father, John Howard Crane on December 16th, 2019.

John, 90, was born on March 24th, 1929 in Toledo Ohio and passed suddenly in Flagstaff, Arizona. John was a resident of Camp Verde, Arizona for 45 years.

John moved to Phoenix in 1943. He enlisted in the Navy Reserve at the age of 16 and joined the Army at age 18, during the Korean War. John received his B.S. and Master’s degree from Arizona State University. He studied at the University of Chicago and received another Master’s degree from the Thunderbird Institute of Foreign Trade in Phoenix, during which time he studied in Mexico City. John was offered a Doctorate degree by ASU but declined in order to pursue a career opportunity in California.

John married Gloria Anne Webb, from West Virginia, while attending ASU. They had a wonderful marriage until Anne’s passing in 1989. John never remarried.

During his younger adult life John was the band manager for big band leader Ted Fio Rito, but his career was in the aerospace industry as an Electronics Engineer for GE and Lockheed. There, he primarily designed missiles and guidance systems.

After retiring John moved his family to Sedona, Arizona in 1971 to work at Verde Valley School. He and his family moved to Camp Verde in 1973. John was very involved in his communities both in California and Arizona.

Amongst many other activities he served on the Camp Verde P&Z Commission and the Yavapai County Board of Adjustments. He was also involved with the incorporation of Camp Verde and their Library.

John spent 9 years serving with the Northern Arizona Healthcare organization as a member of the Board of Directors of Verde Valley Medical Center, Sedona Medical Center, as well as serving on the NAH Board.

John is survived by his three children, Linda Susan Morgan, James Howard Crane, and Margaret Ann Johnson, as well as his sister, Mary Lou Crane and her wife Beverly Soule.

In Lieu flowers, donations can be made in John’s name to either the Camp Verde Library or the Humane Society of Sedona, where he adopted his constant companions Amber and Jade.