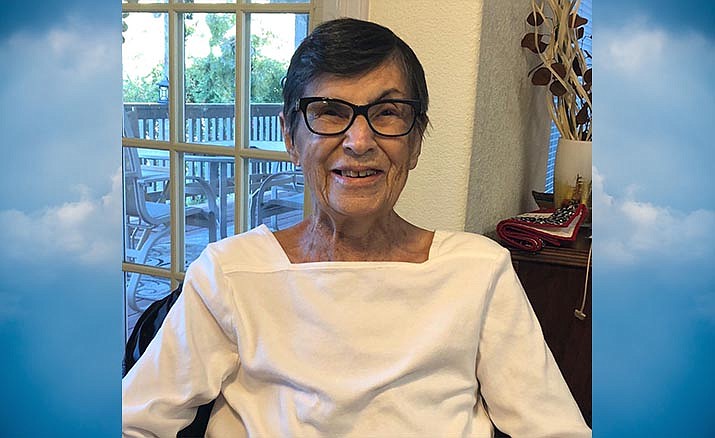 Keela Irene (Jones) Case passed away at her home in Cottonwood, Arizona, surrounded by her family on January 4, 2020.

The family moved to Thomas County, Kansas in September 1923 to a farm in Saline School District where Keela went to grade school. Keela went to the Brownville High School where she graduated in 1938; went 3 semesters at the University of Kansas from 1939-40.

She married Cleo Case on February 9, 1941 at the Methodist parsonage in Colby, Kansas. Cleo and Keela lived on the family farm south of Levant until 1948 when they made a move to the San Luis Valley in Colorado; moved back to Kansas in 1950 where they purchased the Halford Store and Station.

Keela was appointed postmaster in 1950 and served until the family moved to a farm in 1953, 7 miles west of Colby. Cleo and Keela had three children, Atha Colleen, Colin Cleo and Carol Wayne.

At first, she worked school hours and school days so that she could be home with her children and be available for their sports, academic and music events.

After 14 years at KXXX serving as copy writer and a year as Program Director, Keela finally achieved her life-long goal of completing her college education and graduated from Fort Hays Kansas State University in 1971 with a Master of Science Degree in Guidance and Counseling.

September 1971, she started to work in the Colby office of the High Plains Mental Health Center as a Counselor.

She retired from this work in 1987...went back a year later and served as a counselor again for a year and a half. Keela always felt that this was a rewarding profession.

Retirement brought many challenges as she and Cleo faced up to the process of growing old. For several years she worked at the Prairie Museum of Art and History and kept active with hobbies she had taken up through the years. Keela had a lifelong desire to learn. She always had a book, magazine or newspaper in hand.

She attended classes at Colby Community College every semester. She is honored on the Hall of Fame at the college.

After the death of her husband, Cleo, Keela moved to Cottonwood, with her daughter Colleen.

Their home backed on the 3rd fairway of the Coyote Trials Golf Course. She loved the view of the mountains to the north. While living there she and Colleen had many wonderful adventures.

She rode the ski lift at the Snow Bowl in Flagstaff, rode the cog train to the top of Pike’s Peak, took several wild jeep rides around Sedona Red Rocks.

She also continued her desire to study by learning to take the city bus to the local library where she studied Spanish and other courses. Keela never lost her curiosity of the world around her. Her granddaughter Lissa got her interested in Spiritualism. They had many interesting conversations.

Keela is survived by her daughter, Colleen Maison; sons, Colin Cleo Case and Carol Wayne Case (wife Kathy Jensen); six grandchildren and 3 great grandchildren. It can truly be said that Keela lived her life to the fullest and did it her way. She will be missed by many.

We know that Cleo (dad) is there to welcome her home. Goodbye Mom thanks for being wonderful. A celebration of life will be held January 26th at 11:30 am at Pine Shadows Clubhouse, 2050 W. StateRoute 89A in Cottonwood. Keela’s urn will be interned in Beulah Cemetery Colby, Kansas at a later date.