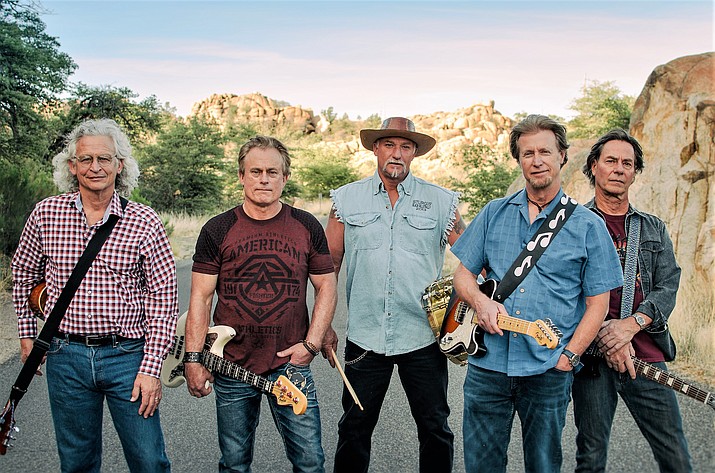 Come celebrate a tribute to the Eagles, at the Old Town Center for the Arts, when “South of Winslow,” appears in concert, Saturday, Jan. 18, 7 p.m.

Originating in Prescott, “South of Winslow” is a collection of five talented and seasoned musicians that perform Eagles music exclusively. The band formed seven years ago when they discovered their mutual love for the Eagles.

Arguably the most universally known and loved band of the last 40 years, Eagles’ music strikes a chord with all ages and musical persuasions.

The Eagles Greatest Hits album recorded in 1971 is all time Best Selling Album, selling over 38 million copies, 5 million more than Michael Jackson’s Thriller. Their ‘Hotel California’ Album is third on the all time list at 26 million copies.

All members share lead singing as well as complex four part harmonies. Live on stage, South of Winslow’s dedication to vocal and instrumental accurracy places them second-to-none with their replication of the Eagles music classics.

Band member Tim Gliddon explained, “The name of the band, “South of Winslow,” was created by borrowing a famous well-known word from the song “Take it Easy.” The specific word “Winslow” from the lyric, “Well, I’m a-standin’ on a corner in Winslow, Arizona” was wittingly utilized for association.

By coincidence, the band originated in Prescott, which is literally and geographically “South of Winslow.” The unique band name identified the band and gave focus to the group’s enthusiastic ambition in performing entertaining music as an honor and tribute to the Eagles

South of Winslow has performed throughout Arizona, Nevada and Hawaii. Aside from their physical appearances, they are often mistaken for the real Eagles.

During a concert event in Honolulu, South of Winslow band performed to an audience of 18,000; sharing the same stage with legendary rock artists Kenny Loggins, Steve Augeri of Journey and Mickey Thomas of Jefferson Starship.

The South of Winslow Concert will be at the Old Town Center for the Arts, Saturday, Jan. 18, 7 p.m. Tickets are available online at www.showtix4u.com.

Tickets are also available in Cottonwood at Desert Dancer and Mount Hope Natural Foods; and in Sedona at The Literate Lizard Bookstore. Old Town Center for the Arts is located at 633 N. Main Street (5th Street & Main St.) in Old Town Cottonwood.