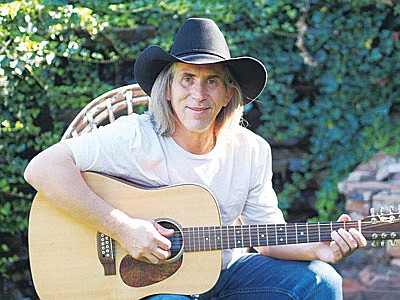 Dan Rice hosts Sedona’s best Open Mic, every Thursday night. Open Mic is an opportunity to hear professional musicians along with new musicians hoping to break into the music scene, all on the same night.

Each musician is allotted time to play, and musicians and audience members get to hear different musicians performing a variety of genres; all music styles are welcome. Musicians are encouraged to arrive early.

Guitar by Robin Bryer. Robin is the owner of the Predator Zip Line (located at Out of Africa) and is also an up and coming Sedona musician.

Robin has always loved music and playing guitar. His hobby is becoming more of a passion, and he’s been performing in Sedona music venues.

According to David, “Music is a catalyst of expression, it can touch you, but you cannot touch it. Experienced only through the moment of sound.

What music means is still yet to be discovered.” David and Luke will be joined by Sedona drummer, Ed Barattini.

Cyge, a seasoned performer with over 45 years on stage and a veteran of the Boston-area folk and acoustic music scene of the 1970s and '80s, performed as a solo singer/guitarist in that vibrant scene and honed his skills as not only a top-notch and well respected guitarist, performer and composer, but also became a highly sought after side man whose talents enhanced the sounds of those he accompanied both live and in the studio.

Shawn Johnson is a musician, singer-songwriter, based out of Tempe AZ. His high energy, soul filled, acoustic rock sound will draw you in and leave you wanting more. He has played 1000s of shows and has hundreds of original songs, and plays all kinds of covers.

D.L. is an Arizona singer-songwriter who delivers a high-energy, yet relaxing, rock and blues show.

Music Monday with music by Rick Busbea. Rick has been on the Sedona music scene for over five years, and his lively upbeat shows have given him the reputation of a “must see” musician while in Sedona.

Rick plays some originals, but his passion is cover songs to take his audience down “memory lane.”

This belief led to the creation of the “Rick Busbea Jukebox” so his audience can pick favorite songs for him to play.

KB Bren hosts a monthly Open Jam. Previously a monthly open mic has been switched to an open jam.

You’ll have to ask KB when you get here what’s different and how the night is going to be run; he intends to put different musicians together to jam for at least a portion of the night.