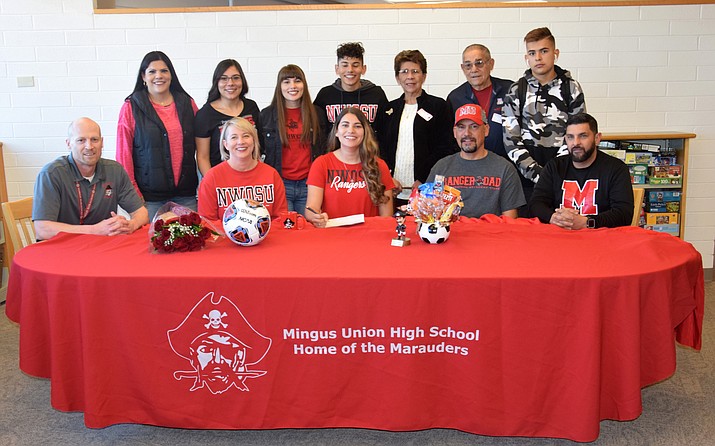 On Friday morning at the Mingus Union library, Bueno signed with NWOSU.

“To be able to go to this school, it was like my dream, it was my hopes, it’s everything I wanted, so it’s like really, really awesome for me,” Bueno said.

NWOSU is in Alva, Oklahoma, about 14 miles south of Kansas with an enrollment of about 2,000.

“I have a lot of family in Oklahoma, I have family like right in the same area and I’ve been to the school and the town and the campus ever since I was little visiting family, so I’ve always seen that campus, I’ve always seen them and I just really wanted to play and that was like a really good level for me to play at and to still be around family, so it’s like a home away from home for me,” Bueno said.

Northwestern Oklahoma State plays in NCAA Division II in the Great American Conference They went 7-10-1 in 2019.

“I’m proud of Felicia, she’s worked hard to get this,” Mingus head coach Calvin Behlow said. “It’s not just hard work, it’s directed. She made sure that she developed the skills that she needed to be able to put herself in this position. I know talking to her over the summer, a couple times, she was really, really worried about being able to go out to a try out and perform and I just looked at her and said ‘hey, go out there and play your game, if you’re good enough you make the team, if you’re not, then you don’t wanna be struggling” and I was confident that she would do it. She’s a great player. She’s strong, she’s physical. She understands the game very, very well. She’s a leader and she’s competitive, she wants to win. So it’s a good fit for her.”

“She’s been huge,” Behlow said. “She’s been in the Mingus program since she was a freshman, she started on varsity as a freshman, played well there. Her role has changed, she scored a lot of goals her freshman year, now she’s kinda had to move back to a holding center mid. Because her role has changed, her skill level, her skill set had to get better and it did She got to the point where I can use her so versatility, she just has so many great skills.”

Bueno said she doesn’t know what position she will play in college. She plans to pursue a medical major.

Erik Solberg is NWOSU’s head coach and 2019 was his first season leading the program. 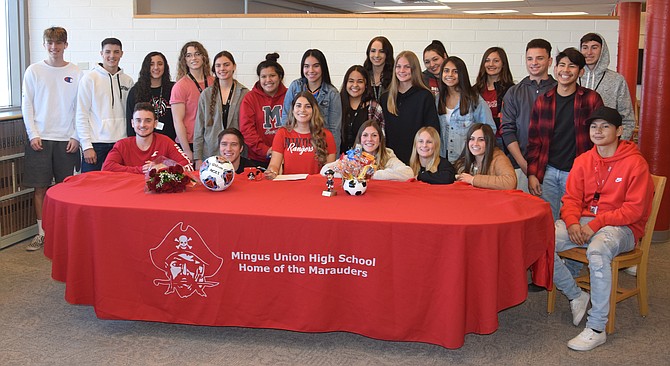 “He’s super nice, I’ve been talking to him for about two years I think, so we’ve always kept in touch,” Bueno said. “We’ve reached out I went and visited during fall break and had my official try out and all that and he was super supportive, super helpful, like even reached out to us and offered for us to go to dinner and like all kinds of stuff like that. So he’s a super great coach and I’m excited.”

This season the Rangers had two players from Arizona on their roster, freshman Clare Merrigan from Oro Valley Ironwood Ridge and sophomore Mikayla Edris from Vail Cienega. Both are in the Tucson area.

“They have girls from like 30 something states, they really reach out and they see kinds of different players I’m not really sure the Arizona connection, mine was just my family,” Bueno said.

Behlow has been coaching Bueno off and on since she was 5 years old.

“One of the really cool things about watching Felicia grow up is that it was never about if she could, it was if she wanted to,” Behlow said. “Watching girls soccer for the last 15 years at Mingus, seeing the girls that go to the next level, she always had those kinds of skill sets, it was whether or not she wanted to. If she didn’t want to play at the next level, it would be her choice, not the choice of something else It’s definitely her choice to choose and I’m glad she did.”

“Felicia never gives less than 100 percent so she’ll represent us very well for that simple fact, that she has so much drive and wants to win so much,” Behlow said.