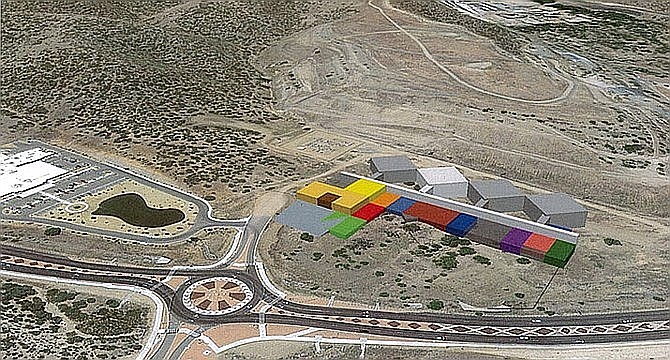 This rendering of a new jail complex represents a facility set to cost Yavapai County property owners a figure not to exceed $70 million. VVN file image

One of the items is the latest in what will be an ongoing series of steps in the construction of the new Yavapai County Criminal Justice Center in Prescott. Wednesday, the supervisors are set to vote on approval of a $3.5 million contract with DLR Group, Inc. for architect engineer services.

The county advertised for bids and received four responses, and, following extensive review, short-listed and interviewed three of the respondents, eventually selecting DLR Group as the highest-ranked firm.

Yavapai County property tax owners are footing the $68 million bill for the new facility, which is meant to not only alleviate overcrowding at the current jail, but also to house a mental health facility that will, in part, deal with substance abuse issues.

The other main action item on Wednesday’s agenda involves designated an area on the Yavapai County Courthouse Plaza in Prescott for a Peace Officer Memorial to honor fallen Yavapai County officers. A brief explanation and needs discussion will be led by Facilities Director Ken Van Keuren.

There are two hearings on Wednesday’s agenda. Both are tied to time extension requests by Alcantra Vineyards, which sits between Cottonwood and Camp Verde, off of State Route 260. The Supervisors have granted extensions related to the planned area development, originally approved in 2004, five times already, in 2008, 2010, 2012, 2016 and 2017.

The most recent request is for a two-year extension for the continued use of an existing farmhouse as a tasting to allow the permanent tasting room to be constructed.

The hearing for the Spring Creek Ranch development re-zoning request, for a Cornville-area planned development that would include more than 1,800 manufactured home pads, plus hundreds of mobile-home pads, apartments and an assisted-living facility, has been pushed back to the March 18 Supervisors meeting.