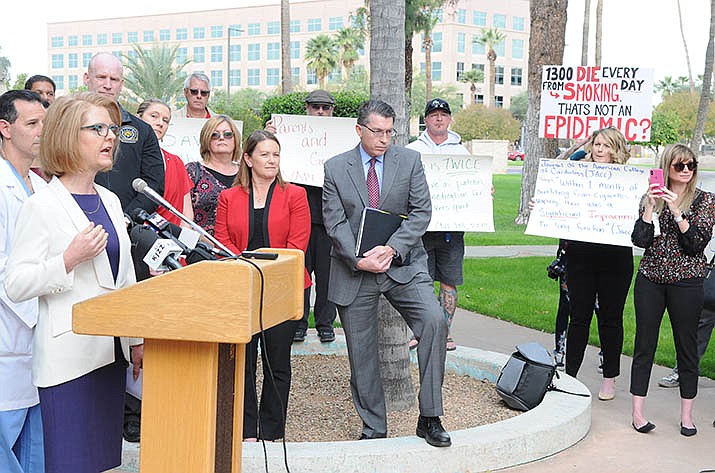 Sen. Heather Carter, speaking, on the left, discusses, with reporters, her proposed legislation earlier this month to regulate vaping products like tobacco. Carter, along with the rest of the Arizona legislature, will be asked to not only spend a huge budget surplus this year, but also tackle a number of social issues. (Capitol Media Services photo by Howard Fischer)

PHOENIX -- While the issues surrounding the budget and water suck up much of the political oxygen at the Capitol, dozens of other issues already are vying for legislative attention. And most tend to fall into a few areas.

At or near the top of the list here is the question of sex education: who should get it and what should students be taught.

Current law makes sex education optional, with parents having to specifically opt in for their children to be enrolled. But Rep. Pamela Powers Hannley, D-Tucson, proposes to reverse that with a presumption that children get sex ed unless the parents opt out.

Potentially more significant, she wants changes to require that programs provide "medically accurate and comprehensive'' education, including that beginning in middle or junior high school students, get "age-appropriate'' information on everything from disease prevention to contraception.

Look for stiff opposition from some Republicans including House Speaker Rusty Bowers, R-Mesa, who says that materials he believes are being used in sex ed courses in Arizona schools "are grooming children to be sexualized.''

Sen. Sylvia Allen, R-Snowflake, already has crafted legislation to prohibit sex education before the seventh grade. That is in line with the results of a survey commissioned by the Center for Arizona Policy which found that 47 percent of parents want to outlaw sex ed through sixth grade.

That answer, however, was based on a poll question, approved by CAP President Cathi Herrod, which said that comprehensive sex ed is now being taught as early has kindergarten "with curriculum that is increasingly graphic and explicit.'' And while the poll question acknowledges the opt-in nature of the program it says that parents "are often still uninformed of what their young children are being exposed to."

Allen's SB 1082, already set for a Tuesday hearing in the Senate Education Committee that she chairs, also requires that programs not just promote abstinence -- already in law -- but that it encourages sexually active students to "return to abstinence.'' And it says that sex ed must "emphasize sexual risk avoidance rather than sexual risk reduction.''

But Allen could have trouble getting the measure enacted into law, particularly the part about banning any kind of sex ed in kindergarten through sixth grade.

"Whatever age we're doing it right now seems to be working,'' Gov. Doug Ducey told Capitol Media Services. And the governor sniffed at the idea that parents who sign permission slips allowing their children to have sex ed classes do not understand what they are approving.

"I think a parent has a responsibility and an obligation'' to know what they are doing, he said. Nor does the governor believe that they don't speak up over practices they do not like.

"I think parents are pretty vocal when they're not happy,'' Ducey said. "That's what I've seen.''

There was no immediate response from Allen.

New fights may also be brewing over abortion.

Arizona lawmakers have approved a series of restrictions on the procedure based on arguments that they protect a woman's health. Some have been upheld by courts, others have not.

The next round is likely to be over the question of how late into pregnancy an abortion can be performed, with other states -- anticipating a changed attitude at the U.S. Supreme Court -- enacting laws banning the procedure at the point of fetal heartbeat, about six or seven weeks into pregnancy. Now that line generally is drawn at the point a fetus is viable outside the uterus, closer to 24 weeks.

The debate here starts with whether Arizona will prohibit insurance companies from refusing to provide health coverage for those with preexisting conditions.

That's a key requirement of the federal Affordable Care Act. But Republican officials from several states, including Arizona, are asking judges to void the remaining provisions of that law.

There is a political risk to Republicans if the popular mandate goes away and there is nothing to replace it. So even Attorney General Mark Brnovich and Sen. J.D. Mesnard, both Republicans, are crafting language they say would kick in should the federal law be voided.

Some of what was at the center of last year's pitched battles may no longer an issue now that the U.S. Food and Drug Administration has set the minimum age for tobacco use to 21 and banned most flavored products. It remains to be seen, however, whether the federal law is, in fact, enforceable in Arizona.

In any case. Sen. Heather Carter, R-Cave Creek, still wants to put vaping under the same laws that govern tobacco use and sales. That means not just the penalties for selling to those under age but also the same restrictions as cigarettes on where people can smoke.

Rep. John Allen, R-Scottsdale, backed by vaping retailers, wants sales and use regulated separately. More significant, he does not want local governments to impose their own stricter regulations.

And on the subject of what people inhale, there will be a push by some lawmakers to have the Legislature enact laws allowing the recreational use of marijuana.

One argument is that anything approved by lawmakers is preferable than something enacted at the ballot box. And then there's the fact that voter-approved measures cannot be altered by the Legislature.

In a related matter lawmakers are being asked to allow health officials to make unannounced inspections of marijuana growing and processing facilities, something prohibited under the 2010 law that approved the medical use of the drug.

Finally, look for debate over the issue of vaccination of children and how broad should be the exceptions that parents can cite in refusing to immunize youngsters against certain diseases.

The big fight here is over who should be behind bars and for how long.

There are currently more than 42,000 people in the custody of the Department of Corrections, with that agency eating up close to 10 percent of the state's $11.8 billion budget. That has some legislators from both parties reviewing everything from mandatory sentencing laws to whether to allow early release of inmates who complete counseling and drug treatment.

Less clear is whether Gov. Doug Ducey will have any better luck this year in getting lawmakers to approve his Safe Arizona Schools plan.

The Legislature already has provided more dollars for counselors and safety officers. But Ducey has had no luck in enacting what he called the "crown jewel" of the package: seizure of weapons in certain circumstances.

That plan, called Severe Threat Order of Protection, would allow not just police but also family members and others to seek a court order to have law enforcement take an individual's weapons while he or she is locked up for up to 21 days for a mental evaluation. Ducey called that "the one tool that could have eliminated the mass shootings that have happened in other places in the country.''

But the plan has stalled amid opposition from those who say it infringes on constitutional rights and lacks due-process protections.

There also has been a backlash of sorts at the local level, with supervisors in Mohave County declaring it a Second Amendment sanctuary, refusing to use local funds to support anything like the STOP orders if approved. Yavapai County supervisors are weighing their own version.

And there are even efforts to protect Arizonans from what some fear will be federal action on firearms. Rep. Leo Biasiucci, R-Lake Havasu City, wants to declare that any act, law, treaty, rule or regulation that violates the Second Amendment "is null, void and unenforceable in this state,'' though his measure does not say who decides.

The big fight here is likely to be over vacation rentals, specifically how much authority local governments can exercise.

A 2016 law stripped cities of any oversight based on the premise these regulations interfered with the property rights of homeowners to rent out a spare room. But what has developed has been quite different, with investors buying up homes and condos solely for the purpose of creating what some lawmakers say are unregulated hotels.

Aside from noise complaints is the issue of whether the practice is drying up the supply of affordable housing. But Gov. Doug Ducey has indicated he would agree to only minor changes in the law.

Lawmakers also are being asked to consider whether companies that lend money secured by a vehicle title should remain exempt from state usury laws which generally limit allowable interest charges to 36 percent a year. Rates on title loans can exceed 200 percent.

There also have been companies that are using the title loan interest cap exception to lend money at the higher interest rates even though there is no title actually being held.

Then there's the question of how what you buy at the store is labeled.

Rep. David Cook, R-Globe -- and a rancher -- is leading the fight to say that the only thing that can be labeled "meat" -- or, for that matter, beef, chicken, pork or lamb -- has to have come from an animal that was at one time living and breathing.

Cook said his target is not so much soy burgers as it is actual meat tissue that is being grown in a laboratory.

And on the subject of spending money, look for possible action on expansion of gaming.

Those 20-year compact that gave Native American tribes exclusive rights to operate casinos in exchange for sharing profits with the state are starting to expire. Look for them to seek permission to take wagers on sporting events, something now legal under federal law.

At the same time, others, including horse track owners, want any new compacts to include the right to accept wagers on sporting events at off-track betting sites.

And Arizona lawmakers may weigh following the lead of California in allowing athletes at state universities to be compensated in the form of contracts for endorsements and sponsorships of products.

Not everything likely to be on the legislative menu fits neatly into categories. Other possibilities include:

-A bid by lawmakers to raise their own daily allowances, a move that comes after voters have repeatedly refused to raise their $24,000 a year salaries;

-Expanding the time limits for childhood victims of sexual assault and abuse to sue their assailants;

-Making it easier for county supervisors to fire other elected county officials, an issue that arose until Maricopa County Assessor Paul Pedersen agreed to quit following his arrest on baby trafficking charges;

-Imposing new restrictions on the ability of groups to propose their own laws and constitutional amendments through the initiative process;

-Providing another window to allow residents of San Tan to vote whether to incorporate after the first effort fell apart;

-Allowing -- or prohibiting -- individuals to list the gender with which they identify on driver's licenses and other state-issued ID cards;

-Ensuring that new wind turbines to generate electricity do not interfere with nearby military operations;