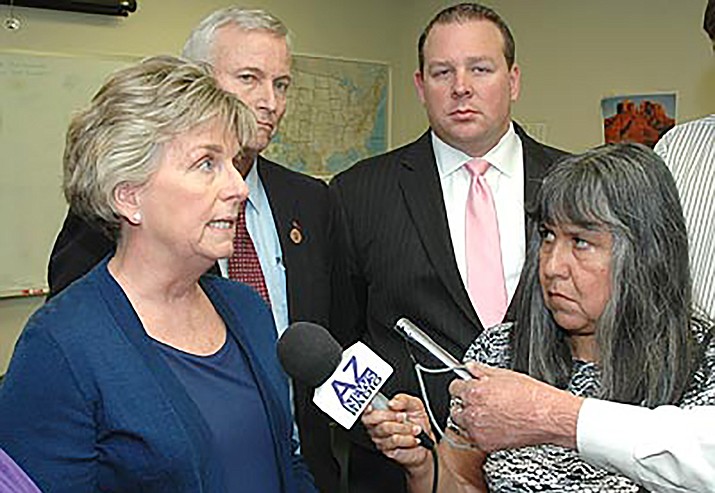 Flanked by other legislators, Rep. Kate Brophy McGee talks with reporters during a prior legislative session. Unwilling to wait to see what, if anything, lawmakers will do, education groups on Monday launched an initiative drive to raise taxes on the wealthiest Arizonans to generate an additional $940 million for public education. (Capitol Media Services file photo by Howard Fischer)

PHOENIX -- Unwilling to wait to see what, if anything, lawmakers will do, education groups on Monday launched an initiative drive to raise taxes on the wealthiest Arizonans to generate an additional $940 million for public education.

The proposal would add a 3.5 percent surcharge on income taxes owed by individuals making more than $250,000 a year and couples filing jointly with income of more than $500,000. David Lujan, director of the Arizona Center for Economic Progress, which helped craft the proposal, estimates that this would hit the top 4 percent of Arizonans.

This new measure is similar to one that did not make the ballot last year. That proposal would have created two new additional tax brackets for those in the upper income range.

Backers need 237,645 valid signatures on petitions by July 2 to put the issue on the November ballot.

Voters actually could be faced with two choices.

Sens. Sylvia Allen, R-Snowflake, and Kate Brophy McGee, R-Phoenix, are proposing to ask voters to increase the current special 0.6-cent education sales tax to a full penny. That could raise about $500 million.

But unlike the initiative launched Monday, the plan to hike sales tax rates would do more than put additional dollars into K-12 education. It also would set aside cash for the universities and community colleges.

Lujan defended financing education needs on the backs of the most wealthy.

"The Legislature has cut taxes every year since 1990,'' he said.

"Many of those tax cuts have been for corporations and the wealthiest of Arizonans,'' Lujan explained. That includes not just cuts in income tax rates but also a 30 percent cut in corporate income taxes, additional tax breaks for capital gains and various exemptions from state sales taxes for things like the purchase of fine arts.

"We never heard people talking then about why aren't they doing tax cuts for everyday Arizonans,'' he said.

At the same time, Lujan said, the state has become more dependent on sales taxes "which means everyday Arizonans have been paying more as a portion of their income for education.''

And he said it makes sense to put all of the additional burden on those earning more than $250,000 a year, saying that makes the state income tax system more progressive.

But Brophy McGee said there's a big flaw in the initiative. She says there's no way it's going to bring in the kind of money that Lujan and other supporters predict.

Lujan said there was some consideration to asking voters to increase corporate income taxes. But he said that wouldn't provide immediate financial benefits, saying companies are sitting on more than $1 billion in tax credits that they could not use in prior years.

"Because of the credit balance issue, you're not going to have the revenue to put money into the classrooms as soon as we like,'' he said.

Others involved in the initiative include the Arizona Education Association, Stand for Children, the Children's Action Alliance and the Arizona Interfaith Council.

Voters never got a chance to weigh in on the 2018 measure.

In a 5-2 ruling, the Arizona Supreme Court kicked it off the ballot after concluding that organizers failed to properly explain in the legally required 100-word description how much taxes rates would go up in the plan were approved.

This version, with its more simplified surcharge on existing tax rates, should avoid that same challenge.