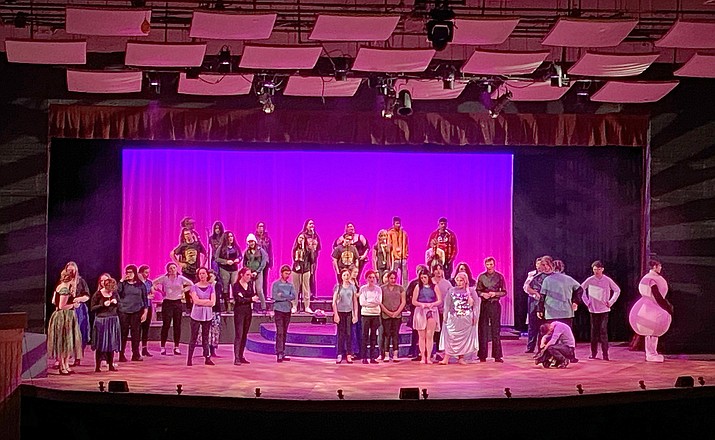 COTTONWOOD — Two hours of music, including well-known songs from famous musical and movies, performed by a cast of close to 100 Mingus Union students.

A collaboration with the school’s choir department, the troupe, known affectionately as A.T.O.R.T. will present this two-act production at the school’s theater. Mingus Union High School is at 1801 E. Fir St. in Cottonwood.

Showing weekends from Jan. 18 through Jan. 26, this revue, said the school’s musical director James Ball, is “just like its predecessors: Passport to Broadway, Broadway Across America, Disney on Broadway, Modern Broadway, and Classic Broadway.”

According to Ball, Mingus Union begin work on Broadway: A Screen & Stage Revue in early August.

“We are thrilled to be finally presenting their hard work to this community,” Ball said.

Broadway: A Screen & Stage Revue is a non-auditioned show, meaning everyone who showed up was able to experience being on-stage in a production.

The show includes medleys from several popular musicals and movies, such as “The Wizard of Oz,” “Waitress,” “Jersey Boys,” “Little Shop of Horrors,” “Frozen,” “Kinky Boots” and “Oliver.”

The performance will also feature its 2018 musical “Crazy for You” and its 2019 musical “Newsies,” with Mingus Union alumni taking the stage once again.

New this year is that A.T.O.R.T. will sync images of your favorite movies with the live performance, Ball said.

Tickets are on sale at atort.ludus.com or at the Mingus Union High School bookstore. Tickets can also be reserve via telephone at 928-649-4466.

Ticket prices in advance are $10 for adults, $9 for seniors and $7 for students and children. All tickets are $3 more at the door.

Groups of 10 or more will receive a 10% discount upon check-out.

This show is rated PG, and jammed pack with dancing, so bring the whole family.