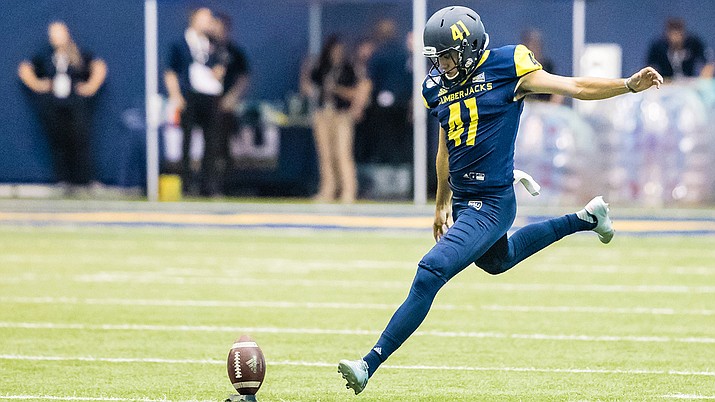 FLAGSTAFF — With the FCS football season in the books, Northern Arizona junior placekicker Luis Aguilar picked up his sixth All-American honor on Wednesday with his selection to the Athlon Sports FCS Postseason All-America Team.

His Athlon Sports honor joins a list that includes All-American distinction from HERO Sports, The Associated Press, FCS ADA, STATS FCS and Walter Camp since season’s end. Aguilar was also honored as the 2019 Fred Mitchell Award recipient as the nation’s top placekicker in the FCS, Division II, Division III, NAIA and NJCAA back in December.

Aguilar finished the season third in the FCS in field goal percentage (88.8) and field goals made per game (1.83) and ninth in scoring (9.8 points per game). Among kickers, he was second in scoring.

Aguilar’s 57-yard field goal against Northern Colorado on Oct. 5 was the longest in the FCS this season and in all, he was 22-of-25 on field goal attempts. The Nogales, Ariz. native made all 52 of his extra point attempts and led the country with 61 kickoffs that resulted in touchbacks.

Aguilar drilled the longest field in the FCS this season (57 yards) on his way to making 22-of-25 field goal attempts, including two from 50 yards or more. He was also perfect on all 52 extra point attempts while leading the country with 61 kickoffs that resulted in touchbacks.

A total of six players from the Big Sky Conference was named to the Athlon Sports FCS Postseason All-America Team.