Politically speaking, it’s a sign of the times in Jerome 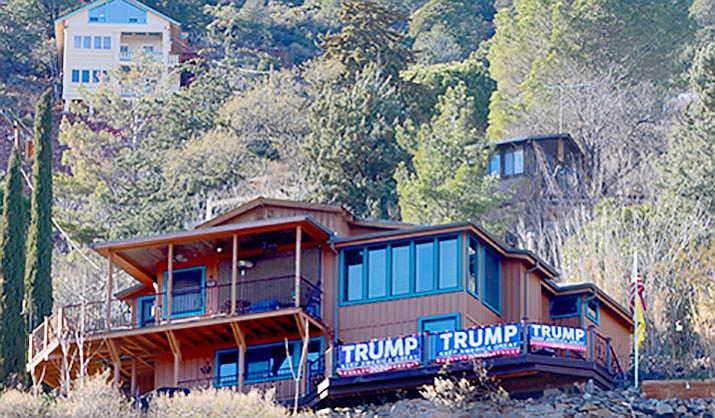 Political banners hang from the porch of a house overlooking State Route 89A on the hill between Clarkdale and Jerome. VVN/Vyto Starinskas

JEROME --Home-grown political signs can be funny, or they can ruffle the feathers of the local pink flamingos that grace Jerome.

If somebody has a “ ‘I love Trump’ or ‘I love Bernie’ flag on the side of their house, I don’t know if we regulate that,” said Jerome Zoning Administrator John Knight.

“That’s the funny thing. What if we outlaw all these portable signs? What about all the Ho Ho Ho signs?” Knight asked.

The town’s sign code addresses candidate signs, and real estate signs, explained Knight. However, there are also signs that fall into the “world of free speech.”

The only way to regulate those kinds of signs would be get to rid of all temporary signs, he said. That would mean signs like real estate signs, he added.

For many years, there have been hand-written political signs of a liberal tone on the State Route 89A curve as motorists enter town near the old high school. Now a neighbor has responded with a second sandwich board next to those signs

“Lock him up” is an example of free speech and not promoting a certain candidate, explained Knight referring to one of the signs.  “I think it’s a tough one.”

Knight said there has been discussion with the town council and the town attorney about these signs, but if they were banned, they would also have to ban real estate signs, so that becomes tricky, he said,

“We want people who sell property to be able to post a sign up that their home is for sale,” he said.

As far as oversized banners that are political and not within the 60-day election rule, Knight said they would need more clarity from the town attorney if anyone had an issue with it. He said a few people have commented on it, but he’s had no official complaints.

“Just some people talking about it, and some of it is politically motivated,” Knight said.