Rift between ranchers, tribes could have ripple effect 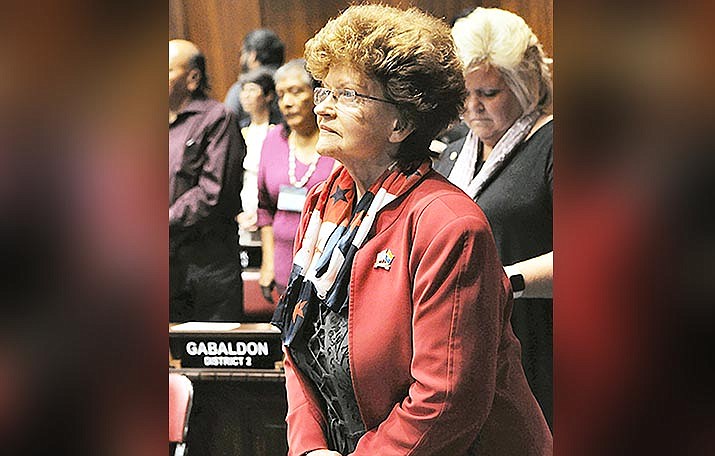 PHOENIX -- A spat between ranchers and Native American tribes is threatening to torpedo a special panel which seeks to keep construction projects from damaging tribal remains and antiquities.

On Tuesday members of the House Committee on Natural Resources, Energy and Water refused to recommend that the Arizona Archaeological Commission be allowed to remain in existence for another three years. That followed complaints from ranching interests that the commission was needlessly holding up projects and requiring landowners to do more than required under federal law.

Without affirmative action of the Legislature the commission will cease to exist later this year.

By Wednesday, somewhat cooler heads prevailed, with Rep. Gail Griffin, R-Hereford, introducing legislation to allow the commission to continue -- but for only one more year.

Griffin said that will give lawmakers a chance to see if the commission can change the way it operates to better take into account the concerns of rural landowners.

The dust-up has created concerns among some Native American leaders who fear what might happen with any effort to interfere with what the commission does.

Ned Norris Jr., chairman of the Tohono O'odham Nation, said while tribes are now confined to reservation lands there are "ancestral remains'' throughout the state. He said changes would have "a very detrimental effect on our ability to ensure there is a process, and to ensure there is a requirement for the protection of those archaeological artifacts and human remains that may be identified as a result of someone plowing through or constructing on a piece of property.''

At the heart of the fight is the commission, created by lawmakers in 1985 to combat what was seen as rampant looting.

Part of its job is public education. But in its role as advisory to the State Historic Preservation Office it works to ensure that all state and federal laws are followed when it comes to construction and digging in places likely to turn up antiquities.

Frustrations by ranchers affected by the commission boiled over in 2018 when the Legislature voted to require a "streamlined'' procedure for dealing with what happens when someone wants to dig for things like water lines and fences, and, more important, when something turns up.

That proposal by Rep. David Cook, R-Globe, would have allowed reports to be prepared by someone who has "completed a national culture resources training program.'' And it would have established buffer zones to allow work to continue outside of that.

It ended up being vetoed by Gov. Doug Ducey.

In his veto message, the governor said he agrees with the goal of reducing regulatory burdens and correcting wasteful activities, "especially if it will bolster our state economy.'' But Ducey said his administration already took "significant steps to improve the process.''

But Cook said that problems remain.

It starts with the makeup of the commission.

"They were all from Phoenix or Tucson,'' he said, and all archaeologists. And Cook said there was no representation from those in the agriculture industry who have to live and comply with any requirements.

"Don't you need the people there that has the side of the problems of what they're causing?'' he said.

Cook also said what the commission has said needs to be done to search for and remove any findings is excessive.

He cited a rancher who wanted to build a corral on Forest Service land. To get the necessary clearance, Cook said, would have run $1 million for a corral with a $14,000 price tag.

Griffin said there are other problems with the way the whole system of historic preservation has been run. She said that includes the failure to keep data in the system of what land has been surveyed for remains or objects in the past, essentially requiring an entirely new survey to be performed for any new projects.

And she, like Cook, questioned the makeup of the commission.

Griffin acknowledged the prior promises to make necessary changes.

"It's still not fixed,'' she said. And Griffin said she didn't want to simply renew the commission for another three years based on promises that this time will be different.

Granting a one-year extension of the commission's lease on life, she said, ensures that lawmakers will have to revisit the issue next year and see if progress has been made.

Norris said the focus has to be on protecting the remains against incursions made by relative newcomers.

"Many of the tribes have lived in this state for centuries, since time immemorial,'' he said. More to the point, Norris said, they were occupying all of this land long before European settlers arrived.

"Although we're secluded on our current existing tribal reservations, we still have an obligation and an interest to ensure the protection of any of our ancestral remains, regardless of whether or not they're on or off our tribal nations,'' he said.

Norris also appeared unimpressed by complaints that the process of identifying and removing antiquities takes too long.

"It's a government,'' he said. "And sometimes a government doesn't move as fast as people would like them to move.''

Rep. Andres Cano, D-Tucson, said if the concern of some Republicans is that the commission is not inclusive enough, there's a simple solution. He pointed out that Ducey, who makes the appointments, is a Republican, with both the House and Senate in GOP hands.