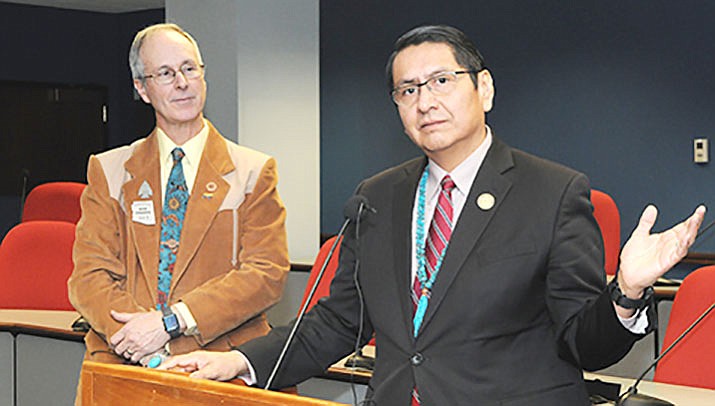 Navajo Nation President Jonathan Nez explains Tuesday why his tribe wants to keep some of taxes generated by sales on tribal lands. He supports legislation to do that crafted by Rep. Bob Thorpe, left. (Capitol Media Services photo by Howard Fischer)

PHOENIX -- Two lawmakers are proposing to let at least several Native American tribes keep some of the taxes generated from sales on reservations.

The proposal by Rep. Bob Thorpe, R-Flagstaff, would siphon off 15 percent of what is collected in the state's basic 5-cent sales tax rate, not counting the 0.6-cent levy for education. The tribes would be able to keep that for economic, public safety and infrastructure needs.

Rep. Arlando Teller, D-Chinle, has a similar proposal in HB 2205. But his plan would increase the tribal share to 50 percent.

But Teller said Wednesday that he will support Thorpe's measure which likely has a better chance of approval, both because of the financial impact and the fact that Republicans control both the House and Senate.

Thorpe, for his part, said he would be "thrilled'' if lawmakers would approve a 50 percent holdback. But he said that 15 percent figure is likely "what we can accomplish."

Thorpe's district includes Sedona and other parts of the Verde Valley.

The measure, Thorpe said, is designed largely to help the Navajo and Hopi tribes which have been hit financially with the closure of the Navajo Generating Station and the Kayenta mine that provided fuel. But it is crafted in a way that all rural tribes -- those outside Pima, Pinal and Maricopa counties -- would be eligible.

And Thorpe left open the door to the possibility that his measure could be expanded to provide financial help even for those urban tribes.

"I have to see what (legislative) leadership is willing to do,'' he said.

Jonathan Nez, president of the Navajo Nation, said this is not a handout. He called it "a matter of perspective.''

"This legislation recognizes that tribal communities have the inherent sovereignty to oversee themselves,'' Nez said.

"You would think taxes that are collected on a tribal land should be utilized by that sovereign,'' he continued. "I would say that 100 percent should go back to the Navajo Nation.''

Thorpe figures that 15 percent figure for rural tribes would generate close to $3.9 million, with the lion's share -- possibly in the neighborhood of $2.7 million -- going to the Navajo Nation.

One potential problem is political.

The legislation proposes to offset the money kept by the tribes by reducing what's paid out in revenue sharing to cities and counties. And while the hit to any one community might not be much, it could still generate opposition.

Teller said the problems on the Navajo Nation are real, saying children can't get to school and people can't get to medical appointments as roads turn to mud.

Thorpe said that urban tribes were left out of the legislation in the belief they are in better financial condition, particularly with the ability to generate dollars through gaming.

Then there's the question of cost. Adding in the sales on all reservations could boost the price tag to the state -- meaning the cities and counties -- above $7.3 million.

Anything the tribes get to keep is in addition to their own sales tax rates. In the case of the Navajo Nation, that adds another 6 percent.

Navajo pull backing for tribal energy firm over coal mine purchases
Navajo Nation Council says no to Escalade development
Navajo Generating Station, mine face years of breakdown, cleanup
Navajo Nation to get $554 million in largest-ever settlement with a single tribe
From state Senate to State Department: Jackson is new liaison to tribes