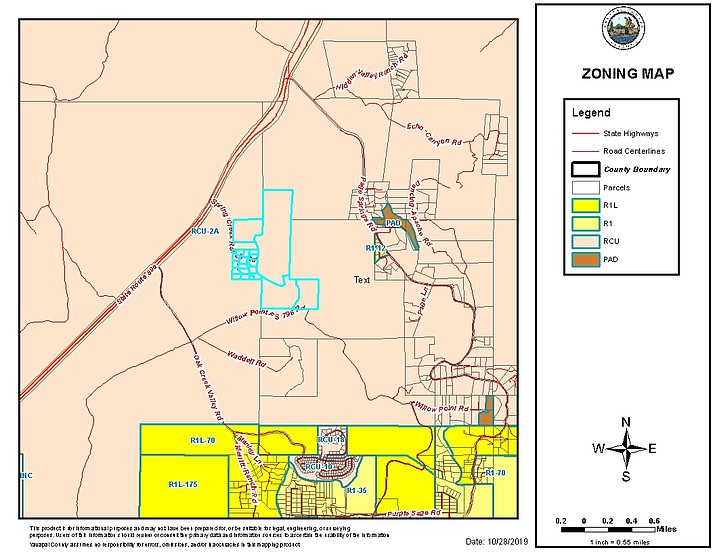 The yellow highlighted section on this map shows the area where a developer requested zoning changes that would bring thousands of mixed-use commercial and residential occupants to what is now a relatively rural set of parcels. The developer for the project, called Villa Bellagio, recently withdrew the zoning request application. Courtesy image

COTTONWOOD - An announcement during Wednesday’s Yavapai County Board of Supervisors meeting confirmed what most observers anticipated would be the next move by a developer hoping to build a mixed-use project.

District 3 Supervisor Randy Garrison, during his report at the start of Wednesday’s meeting, said the applicant for a Cornville-area development known as Villa Bellagio, has withdrawn his Planning and Zoning application for a large mixed-use planned are development.

That means concerned residents and others who are tracking such projects won’t see the Villa Bellagio project go before the Yavapai County Planning and Zoning Commission anytime soon for approval. A re-zoning application must also have at least one public input meeting prior to going before the Commission.

Garrison reminded those in attendance that any withdrawn application can still be revised and re-submitted; it simply requires more work and time investment on behalf of the applicant.

The project is technically in the district of District 2 Supervisor Tom Thurman, who gave his report before Garrison on Wednesday.

“Supervisor Thurman didn’t let everybody know, but the Bellagio project has been pulled,” Garrison said. “If you’re paying attention to development, that is one project you won’t have to worry about — at least for this next little while.”

The listed developer for Villa Bellagio is Sunset Valley Farms, LLC, a Mesa-based company. Its proposal for 132 acres, located along Waddell Road, is off of State Road 89A between Cottonwood and Sedona, and is close to the proposed Spring Creek Ranch development, where a plan was recommended for disapproval by the County Planning and Zoning Commission in December by a 5-4 vote.

The Villa Bellagio plan included single-family and multifamily housing, a lake, more than 100 apartments of various types, a waiver of a two-story height limitation to allow for three stories, plus a 200-room hotel, another 200-unit assisted living facility, a 50-room “boutique” hotel, 24 studio hotel suites, an art gallery, split-level shops (sections of the parcel are rugged, steep land), a condominium concourse of 500 or more units, three wineries, a vineyard, 113 patio homes, a school site, 39 “high-end” lots, 39 custom lots, a camping area for the mentally and physically disabled and custom offices.

The plan mentions a well on the north side of State Road 89A that “shows a drop to depth in water that corresponds to drought in the area” and that drilling depths in the area range from 40 to 140 feet.

Both Spring Creek Ranch and Villa Bellagio were topics at a non-required meeting hosted by the Cornville Community Association on Nov. 12. Both projects were wildly unpopular among those who spoke at that meeting.

Garrison said there is no active seeking of public feedback on Villa Bellagio.

“We probably will still get some letters, because people aren’t paying attention,” Garrison said.