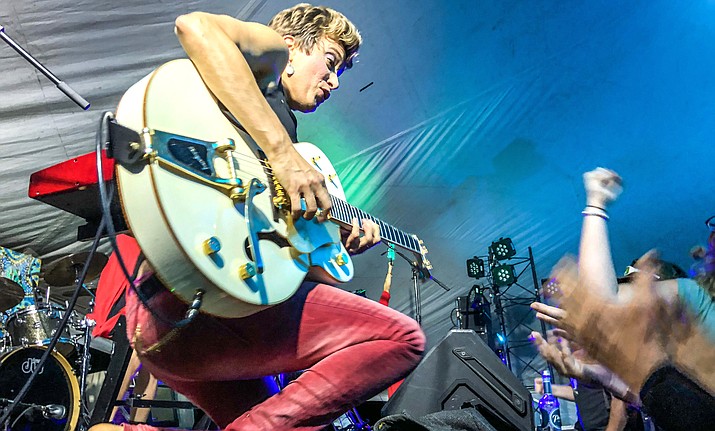 Singer, songwriter and renowned fingerstyle guitarist Christie Lenée is more than a musician – she’s an experience. Symphonic compositions flow from her fingertips effortlessly, with sound ranging from transcendental folk-pop to virtuosic instrumentals.

Fingerstyle guitar sensation Christie Lenée will appear in concert at the Old Town Center for the Arts in ‘Old Town’ Cottonwood, Arizona on Saturday, Jan. 25, 7 p.m.

Singer, songwriter and renowned fingerstyle guitarist Christie Lenée is more than a musician – she’s an experience. Symphonic compositions flow from her fingertips effortlessly, with sound ranging from transcendental folk-pop to virtuosic instrumentals.

She recently told Digital Journal that “years ago, I set my intention to be an inspirational songwriter, though over time I’ve come to realize that inspiration comes in many forms. Talking about the dark and the light, the beauty and moments of pain are all forms of inspiration.”

Christie has shared stages with Tommy Emmanuel, Tim Reynolds (Dave Matthews Band), Andy McKee, and Amy Ray (Indigo Girls) to name a few, who have all raved about her talents (see below).

Her first place victory in the acclaimed 2017 International Fingerstyle Guitar Championship has earned her featured coverage in Guitar Player Magazine, Acoustic Guitar Magazine, and Premier Guitar. She has released five albums, with “STAY” one of three finalists for “Best CD of 2016” (Indie Acoustic Project Awards). The album includes three instrumentals produced by Grammy award-winning producer Will Ackerman, founder of Windham Hill Records, and a music video for the title track supporting a movement on suicide prevention.

In 2018 Christie released an arrangement of Ed Sheeran’s “Castle on the Hill” which garnered media attention across several Digital Publications. AXS.com’s Jim Wood noted “through the use of harmonics and tapping, Lenée’s infectious style utilizes all parts of the guitar and combines elements of folk, rock and pop into one tasty and eclectic musical stew.”

With over 12,000 fans on Facebook and nearly half a million plays on YouTube, Christie continues to spread the love of music through live performance, radio airplay and appearances on multiple television stations.

Her most recent music video “Call My Heart Back Home” premiered via Acoustic Guitar Magazine. Her next video, “Free World Citizen”, is an anthem expressing the connection of all beings. As an artist, she hopes to bring joy, freedom, and light to the world though the love of music.

Don’t miss multi-talented Christie Lenée, at the Old Town Center for the Arts. Tickets are $20 advance and $22 at the door, $25 priority seating in the first 3 rows.

Purchasing tickets prior to day of show is strongly advised, as this event is expected to sell out. Old Town Center for the Arts Is located at 5th Street & Main in Old Town Cottonwood. Tickets are available online at showtix4u.com. Tickets are also available in Cottonwood at: Desert Dancer, and Mt. Hope Natural Foods, and in Sedona at The Literate Lizard Bookstore.  For upcoming events, visit www.oldtowncenter.org. For further information, contact Elena Bullard at 928-634-0940.