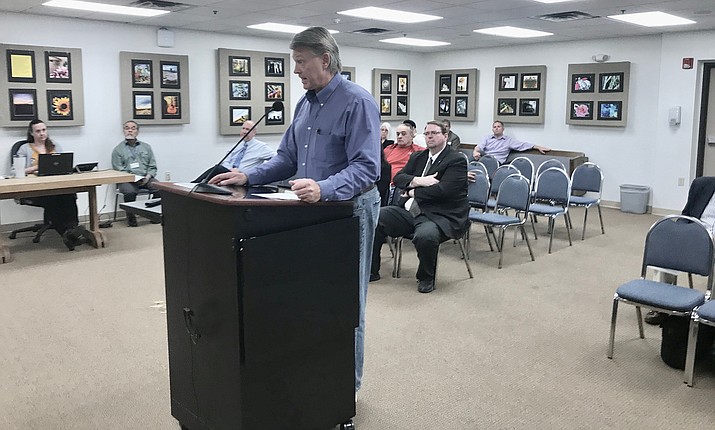 John Bradshaw takes questions Wednesday from the Yavapai County Board of Supervisors regarding the Alcantara Vineyards he’s helping develop. The project still isn’t completed, despite having been first approved by the county more than 15 years ago. VVN/Jason Brooks

COTTONWOOD — All four of the Yavapai County Supervisors who weighed in during Wednesday’s Board of Supervisors hearing for Alcantara Vineyards and Winery had, basically, the same question: What’s different this time, since we’ve heard similar promises on this project for 15 years?

Alcantara is a planned area development that has now received an extension — of one type or another — from the Supervisors seven times since the PAD was first approved in 2004. The latest came Tuesday when the project was reluctantly given a two-year extension on the PAD by the Supervisors, along with only a six-month extension on the conditional use permit.

John Bradshaw, who, along with a business partner, is leasing the vineyards and tasting room from owner Barbara Predmore, detailed, for the Supervisors, some new challenges he’s facing in getting the permanent tasting room building constructed and other aspects resolved.

“I am deeply involved in negotiations with the Town of Camp Verde about their annexation of this property,” Bradshaw told the Supervisors. “And I’m in the process of redesigning the main building to make it two stories, to provide guests with more of a view of the river.”

The approved plan consists of a tasting room, restaurant, casitas and a bed and breakfast on a 12-acre portion of a 70-acre PAD. Four of the five supervisors (Mary Mallory of District 5 was appointed last year, and didn’t have many questions Wednesday) expressed reluctance to grant another extension.

Their reluctance stemmed from the uncertainty surrounding any annexation possibility and how much struggle it’s taken to get the vineyards up to this point.

“Look at this from our perspective,” Board Chair Craig Brown said. “We’ve heard many promises on this, not from you, but from others — not many of which have materialized.”

Alcantara Vineyards is located between Camp Verde and Cottonwood on rural land nestled into a bend in the Verde River, right where Oak Creek flows into it, so there are several neighbors within earshot of the building currently used as a tasting room. Live music and special public events happen there regularly, as do private occasions, such as weddings, and two area residents spoke at Wednesday’s meeting against the extension request.

Noise at large events was the main source of the complaints.

The vineyards boasts access to more than 13,000 wines, and has a wine club that enthusiasts can join.

Bradshaw told the Supervisors that it’s important for Alcantara to remain open through upcoming construction, as temporary shutdowns tend to lose a great number of customers.

County Director of Development Services Dave Williams said there is a “chapel” on the property THAT was built with an agricultural exemption, but was used for non-approved purposes, and Alcantara management has been instructed by the county not to do so again.

District 3 Supervisor Randy Garrison praised the hard work of Bradshaw, who has only actively worked on the development since July of last year, for some progress, including getting a paved road out to the main site. But he was also adamant with Bradshaw that the developer must make significant progress on several fronts in the next six months.

“I realize brand consistency is important, but if we can’t get this going, you rent a place in Old Town (Cottonwood) and you sell wine that way, until you have everything up and ready to roll,” Garrison said.