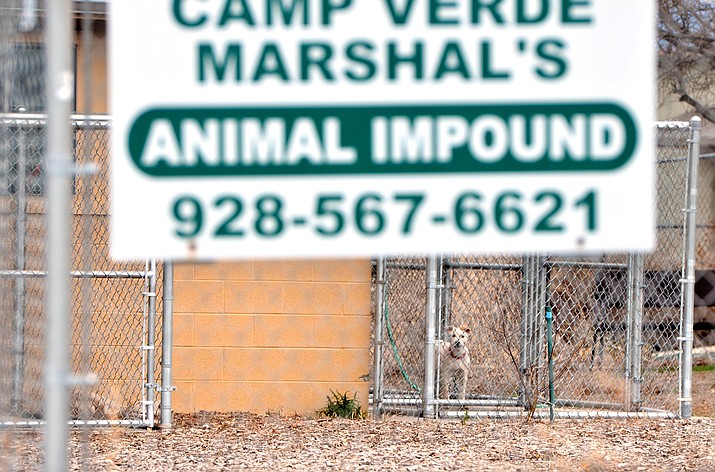 A dog barks inside the Camp Verde dog shelter on Thursday. Dogs only stay a few days in the town shelter. VVN/Vyto Starinskas

CAMP VERDE - A Camp Verde rescue owner worries that while the Verde Valley Humane Society and town officials try to work out a new fee agreement, dogs in Camp Verde will be at risk and may suffer.

A post on Facebook by the Verde Valley Humane Society in Cottonwood Wednesday announced that they will no longer “ be able to accept lost, stray and un-owned animals from residents of the Town of Camp Verde.”

“There’s a lot of loose dogs out there,” she said. “They get cut off by State Route 260 and can’t find their way home. Other dogs get dumped on Salt Mine Road by people who think that they will be rescued at one of the developments.”

The Town of Camp Verde does have its own dog shelter, but it’s meant to be temporary housing for four or five dogs, according to the Camp Verde Town Manager Russ Martin Thursday.

The town only had to bring eight dogs to the VVHS last year, the chief said. But during the same year, about 40 Camp Verde residents turned in dogs by themselves to the VVHS. These include strays and owner-surrenders.

The VVHS now wants to increase the fee from about $70 a dog (the previous agreement) to $7,200 to cover the dogs the town brings in and also include the owner-surrendered dogs under one contract, Rowley said. He does not have that in his current budget.

Martin said VVHS is planning on coming in and making a presentation to the council.

But he was caught off-guard by the urgency that caused them to shut off Camp Verde from the humane society.

The VVHS Facebook post states that they “will continue to do our best to help by taking in owner-surrendered animals from the Town on a space-available basis.”

The council will have to discuss the change in the fee structure¬¬¬¬ before it can be approved, Martin pointed out.

VVHS Executive Director Tacy Pastor said they have been working with the Town of Camp Verde since July 4 to renew their contract. “Contracts are annual and designed to reimburse us for some of the costs of caring for the lost, stray and unowned animals that come to us.”

Pastor pointed out that the costs have escalated dramatically and the Town of Camp Verde made the decision simply not to renew the contract at this time.

She said veterinary costs have increased 250 percent in recent years, as an example.

The VVHS currently has contracts with the City of Cottonwood, Yavapai County, Town of Clarkdale and the Yavapai Apache Nation and many of these contracts date back 10-15 years.

“The other towns we work within the Verde Valley have no existing shelter to hold their animals in so we provide that service for them,” Pastor explained.

The Town of Jerome has a small humane society, the Humane Society of Sedona has a contract with the City of Sedona and everyone else is covered on one of the VVHS contracts, or is unincorporated and therefore covered under the Yavapai County contract, including VOC, Pastor said in an email on Thursday.

“The Town of Camp Verde has a small shelter facility and a group of amazing volunteers that have been caring for the lost pets of Camp Verde already and we feel certain they will continue to be there for them in the future,” she stated.

The Camp Verde shelter is staffed by volunteers. “We get in less than 10 dogs a month, if that,” Martin said.

The town currently does not have an animal control officer, who took another position in the department. Rowley said. But they are interviewing for a new one.