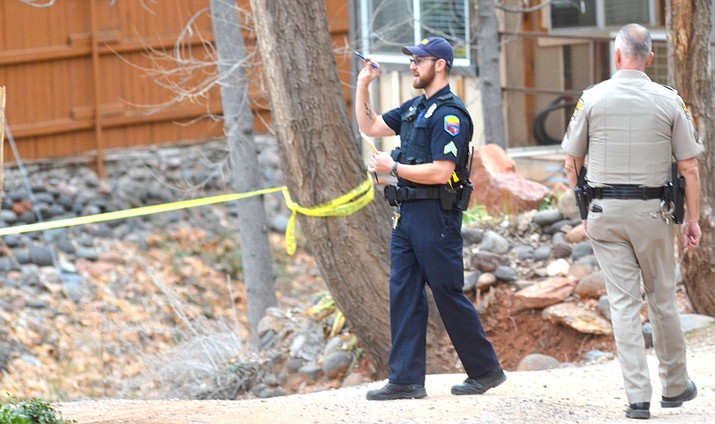 Sedona PD and Arizona Department of Public Safety officers secure the scene of an officer-involved shooting in Sedona Monday afternoon. According to the City of Sedona, “Three Sedona Police Department officers were in an officer-involved shooting on January 20, 2020. No officers were injured. The armed subject, a 41-year-old male, is deceased.” No other details are available. VVN/Vyto Starinskas

This story has been updated based on new information provided by Sedona PD at 8:45 p.m. Monday.

SEDONA – A 41-year-old man is dead following an officer-involved shooting in Sedona Monday.

According to a post on the City of Sedona Facebook page, “Three Sedona Police Department officers were in an officer-involved shooting on January 20, 2020. No officers were injured. The armed subject, a 41-year-old male, is deceased.”

The shooting occurred on a private road at the end of Newcastle Lane at around 1:30 p.m.

The post continued to state the Arizona Department of Public Safety is responding to the investigation.

“The name of the deceased will not be released until next of kin are notified,” according to the Facebook post.

At 8:45 p.m. Monday, Sedona PD released the following timeline of events that led to the shooting:

-At 1:26 p.m., a resident on the 50-block of Newcastle Lane called 911 to report an unknown man shouting in the vicinity while in possession of a machete and a stick. The caller also indicated the man was possibly cutting himself with the machete.

-At 1:29 p.m., Sedona Police Department officers arrived on scene and contacted the man.

-At 1:32 p.m., shots were fired at the man and officers immediately called the Sedona Fire Department for emergency medical care for the man.

“This incident is being investigated by the Arizona Department of Public Safety (DPS). Per the Sedona Police Department’s protocol, the two Sedona Police officers involved in the shooting will be placed on administrative leave,” according to a news release from Sedona PD.

“This was a significant, unfortunate event for all involved – for the subject, his family, the officers and the community. An officer hopes to go their entire career without having to discharge their weapon. Our hearts go out to everyone affected," said Sedona Police Chief Charles Husted.

The Sedona Police Department encourages any witnesses with information regarding this incident to contact the Department of Public Safety at (602) 223-2212.