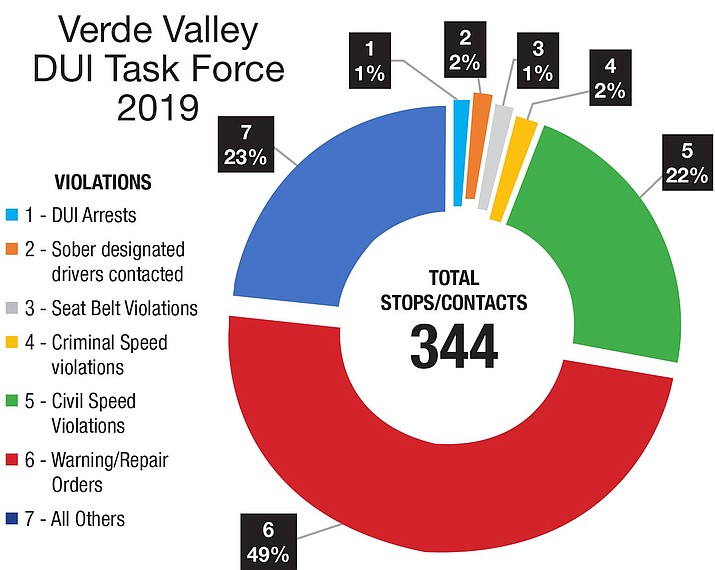 But the number of stops is not the reason the task force was a success, said Brian Armstrong, retiring commander with the Camp Verde Marshal’s Office.

The permeating philosophy with the task force, now in its third year, is the “high visibility of police in a community at a given time,” Armstrong said.

Having several officers from each of the agencies that participated means “a lot of extra patrol cars on the street in addition to the normal patrol teams,” Armstrong said.

According to the National Highway Traffic Safety Administration, 10,511 people died as a result of drunk-driving crashes in 2018, and 220 children 14 and under killed in drunk driving car crashes in 2017.

In addition to the Camp Verde Marshal’s Office, Clarkdale, Cottonwood, Jerome and Sedona police departments also participated in the task force, as did the Yavapai College and Yavapai-Apache police department and Arizona Department of Public Safety – DPS.

In 2019, the Verde Valley Holiday DUI Task Force made four DUI arrests, a total which Cottonwood Sgt. Joshua Fradette said he was pleased with.

“With that many interactions, people are making better choices, either getting a designated driver or they are driving less,” Fradette said. “No fatalities, that’s important. Making sure our communities are safe.”

The Holiday DUI Task Force arrested two drivers for aggravated DUI, one driver for extreme DUI – .15 or greater – cited 76 drivers for driving in excess of the speed limit, and cited another six drivers for criminal speeding.

Criminal speeding is when a driver is cited for traveling at more than 20 miles per hour faster than the posted speed limit.

On the job at the Cottonwood Police Department for 18 years, Fradette said he has learned “that the more we’re out and about, it’s a reminder for drivers to make better choices.”

“Not only do they drive safer, but they feel safer,” Fradette said.

According to Fradette, the task force is a “good networking opportunity to get together to work toward a common goal.”

The legal limit in Arizona for driving under the influence of alcohol – DUI – is a blood-alcohol content of .08. According to Armstrong, it is also illegal in Arizona for an individual to operate a motor vehicle if impaired to the slightest degree by alcohol or drugs, even with a BAC under .08.

The objective of the Verde Valley DUI Task Force, Armstrong said, is “to intercept alcohol and drug-impaired drivers before an accident can happen.”

Since the inception of the area-wide task force, the number of stops and contacts has increased each year as the task force has grown, Armstrong said.

“Officers learn that the more stops they do, the more word will spread of what they are doing and they are out looking, which again is a deterrent,” Armstrong said. “Deterrence is our primary goal of the task force, and enforcement is second.”