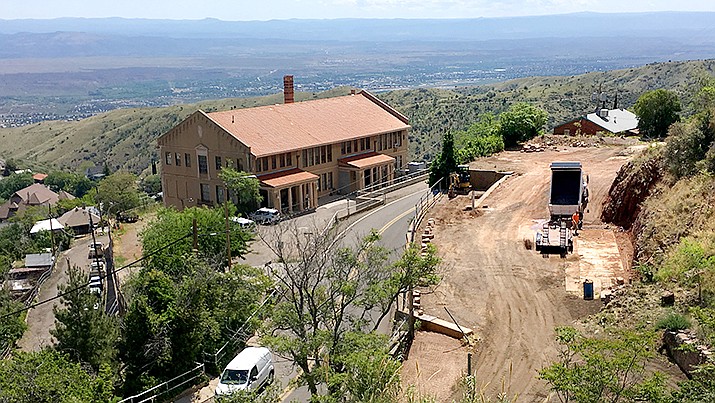 The Jerome Town Council has requested more input from the community before moving forward with a plan that would make town-owned parking spaces available to businesses such as the Cuban Queen. VVN/Vyto Starinskas

JEROME - The Jerome Town Council has requested more input from the community before moving forward with a plan that would make town-owned parking spaces available to businesses such as the Cuban Queen.

Because of the response from property owners who were not included in the original parking overlay district boundaries, the towncouncil felt that more time was needed to interview property owners and come up with more options, Jerome Zoning Administrator John Knight said.

The Jerome Council on Tuesday night tabled any action on the proposed Parking Overlay District, he said. The council had the option of sending it to Planning & Zoning for hearings.

“It’s not going to go away,” Knight said. “Anything we can do to provide more parking to the downtown is a good thing.”

The zoning administrator also he was hopeful that a solution will be worked out that will meet the concerns of the owners of the former Cuban Queen.

He said more businesses have expressed interest in being in the Parking Overlay District. In the early draft of the district, the Cuban Queen and House of Joy were the only two businesses included in plan, but Knight always said more businesses could be added and more public parking spaces would have to be developed.

“We have to find a way to make everyone happy,” he said.

Jerome residents have been discussing parking kiosks for 11 years before they finally got them, Knight pointed out. Good things take time in Jerome, he said.

Local couple Windy Jones and Josh Lindner have been working with the town on a path that would allow them to construct and rebuild the Cuban Queen without on-site parking. They plan a historically similar, three-room boarding house rebuild with retail space.

If the proposed “Overlay District” ordinance is passed, the Cuban Queen and other included business will be able to purchase parking spaces from the town.

Businesses also would have the option of purchasing parking spaces from private individuals, but the Overlay District will develop parking spots with the town.

The Cuban Queen owners are going through their permitting process with a memorandum of understanding with the town that they will develop six parking spaces from the town under the Overlay Parking District or a private party.

Here are the latest developments in the Cuban Queen’s path to successful permitting in Jerome:

• The Jerome Design and Review Board has approved the design elements such as colors, windows and doors for the new Cuban Queen building, Knight said.

• A Conditional Use Permit Site Plan Review for Mixed-Use Commercial building was approved for the Cuban Queen on Jan. 8, according to Knight.

• The Jerome Planning & Zoning Board also approved the recommendation of a conditional use permit to allow a boarding house/rooming house in the C1 zone. This recommendation now goes to the Jerome Council for approval next month.

• The Parking Overlay District is still in a “conceptual phase.” It still will need P&Z approval, public hearings and another council approval.

The fees would go to developing and building more parking spaces, Knight said.

Knight said he expected the Overlay District would be on the next Council meeting agenda after more direction and discussion from other property owners.