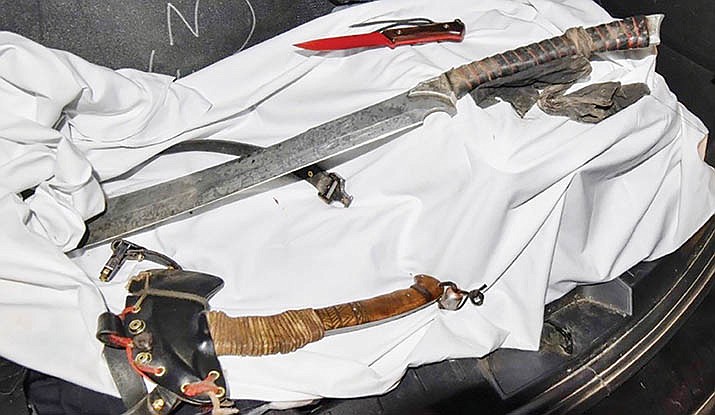 SEDONA - Late Wednesday afternoon, the Sedona Police Department released a photo of weapons they say were in the possession of Jonathan David Messare, 41, when he was killed in an officer-involved shooting Monday.

Messare, according to Sedona police, was originally from Oregon. He relocated to Sedona in the summer of 2019. The Jan. 20 early afternoon shooting occurred in the 50-block of Newcastle Lane.

Per the Sedona Police Department’s standard protocol related to all officer-involved shootings, Pelletier and Hunt have been placed on paid leave. Neither officer was injured.

The Arizona Department of Public Safety is still investigating this incident and as the Sedona Police Department gathers more details, additional information will be released.

"This was a significant, unfortunate event for all involved — for David Messare, his family and friends, the involved officers, our entire police department and our community," said Sedona Police Department Chief of Police Charles Husted. “An officer hopes to go their entire career without having to discharge their weapon. Our hearts go out to everyone affected and we will continue to release details as we gather them.”

Sedona Police released the following timeline of events that led to the shooting:

-At 1:26 p.m., a resident on the 50 block of Newcastle Lane called 911 to report an unknown man shouting in the vicinity while in possession of a machete and a stick. The caller also indicated the man was possibly cutting himself with the machete.

-At 1:29 p.m., Sedona Police Department officers arrived on scene and contacted the man

-At 1:32 p.m., shots were fired at the man and officers immediately called the Sedona Fire Department for emergency medical care for the man. -At 1:40 p.m., the SFD declared the man was dead.

The Sedona Police Department encourages any witnesses with information regarding this incident to contact the Arizona DPS at 602-223-2212.