AIA notebook: Sedona Red Rock football’s appeal to move down to 1A from 2A denied 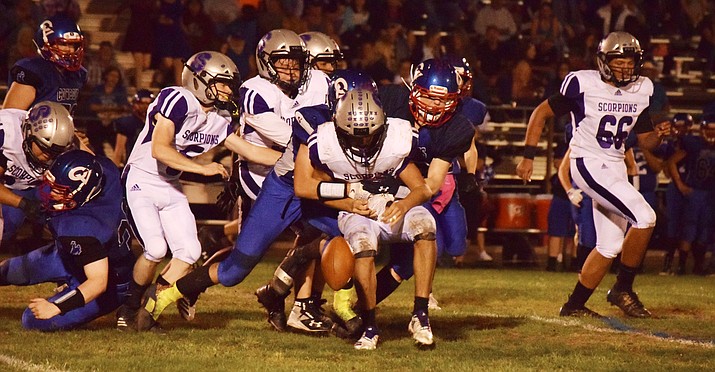 On Wednesday the Arizona Interscholastic Association decided which schools’ appeals of their 2020 football placements appeals were approved or denied. Both Sedona Red Rock and Chino Valley hoped to move down a level but were rejected.

In team sports, the AIA separates the schools into six levels based on enrollment in most sports with 1A being the smallest and 6A the biggest. However the football conferences, starting in 2020, are based on performance.

Sedona Red Rock, placed in 2A, sought to move to 1A but their appeal was rejected. Chino Valley wanted to move to 2A down from 3A but also failed.

If the Scorpions’ moved to 1A had been successful, it would have ended their rivalry with Camp Verde on the football field, as 1A is 8-man football.

There were 19 schools that appealed their football placement and the AIA approved five of those. Two schools, Scottsdale Coronado and Tuba City, wanted to move up, both to 3A from 2A and both were approved.

Kingman Academy’s desire to move to 2A from 3A was approved, as was Tucson Empire’s move down, though they went to 4A from 5A, not to 3A as they wanted.

Scottsdale Prep, who was originally slotted in 6A got to move down to 5A. The Saints have a 3A enrollment of 837 but appealed up to 4A in the other sports.

Camp Verde remained in 2A and Mingus Union stayed in 4A.

The football alignments are every year whereas the other sports are done every two years.

Mingus Union remained in the 4A Grand Canyon Region in the other team sports, while Camp Verde moved up to 3A North Central Region in volleyball, basketball, baseball and softball.

In individual sports, the schools are broken up into divisions, with Division I being the biggest.

Camp Verde moved up to Division III from D-IV in cross country and track and field. The Cowboys’ enrollment went up to 553 to 497 in 2017.

The wrestling divisions have not been announced yet.

The next step in the 2020 scheduling process is for the football regions to be announced, which is scheduled for Jan. 28.

The basketball state championships and final fours are headed south.

On Thursday the AIA revealed that the 4A, 3A and 2A basketball state championship games will be held at Veterans Memorial Coliseum in Phoenix this year. Additionally, the 2A and 3A state semifinals will be there also.

The 4A semifinals will be at the school with the better seed. The state championship games for 5A and 6A will be at ASU while the 1A state title games will be at the Findlay Toyota Center in Prescott Valley.

The 4A to 2A state championship games will be Feb. 29 with the 2A semifinals taking place on Feb. 28.

The Veterans Memorial Coliseum is located at the Arizona State Fairgrounds. The Phoenix Suns played there from 1968 to 1992 and the Phoenix Mercury will play there in 2020. It has hosted the likes of Elvis, Pope John Paul II, President Barack Obama, and Cher.

The 4A and 2A state tournaments are 16-teams. On the 2A side, the first two rounds will be at Prescott Area sites: Prescott High, Bradshaw Mountain, Findlay Toyota Center and Yavapai College.

The 4A state tournament’s first three rounds will be at the home of the better seed.

Last year the state championship games were at ASU for 5A and 6A Gila River Arena for 4A, 3A girls and 2A, Gilbert Highland for 3A boys, and Findlay Toyota Center for 1A. The AIA had to rearrange the tournament locations after a snow storm where they originally didn’t alter the schedule.

Wrestling on the move?

On Wednesday the Arizona Republic reported that the AIA state wrestling tournament will move to the Veterans Memorial Coliseum next year.

This year it will be at Findlay Toyota Center, as it has been for years but will move to the Phoenix Area.

In 2019 the AIA added a girls wrestling tournament, also held at the Findlay Toyota Center, the same time as the boys tourney.