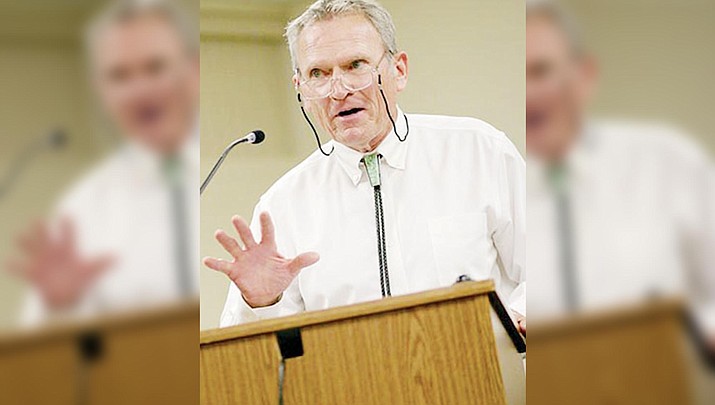 In a complaint, Council Member Joe Butner is accused of asking questions “trying to introduce some unsubstantiated allegations." At 4:30 p.m. Tuesday, Jan. 28, the Camp Verde Town Council will meet to discuss the complaint. VVN file

CAMP VERDE - At 4:30 p.m. Tuesday, Jan. 28, the Camp Verde Town Council will meet to discuss a complaint filed against one of its council members for asking questions “in an interrogative manner” at council’s Jan. 8 meeting.

Bruce George stated in a Jan. 13 complaint to the town that Council Member Joe Butner asked questions “trying to introduce some unsubstantiated allegations” as he sought reappointment to the town’s Planning and Zoning Commission.

According to Martin, the Jan. 28 meeting is an opportunity to put George’s complaint “in front of council.”

“Council will sit down, go through the complaint, and let everyone speak to it,” Martin said. “We’ll be able to discuss the next steps, but there will be no action taken.”

At the Jan. 8 meeting, Butner distributed copies of a complaint against George to the attending council members. The report was obtained on Dec. 19 through a public records request by Council Member Bill LeBeau.

The complaint against George was called in to the Camp Verde Marshal’s Office just before 6 p.m. Friday, Dec. 13. The copy Butner handed out only included the original complaint, as the Marshal’s Office had not yet conducted a follow-up interview with George.

The Marshal’s Office conducted its follow-up interview with George on Jan. 9. According to that report, George denied the accusation. No charges were filed against George.

Martin said it is not yet known whether this matter will be scheduled at council’s next regular meeting, scheduled for 6:30 p.m. Wednesday, Feb. 5.