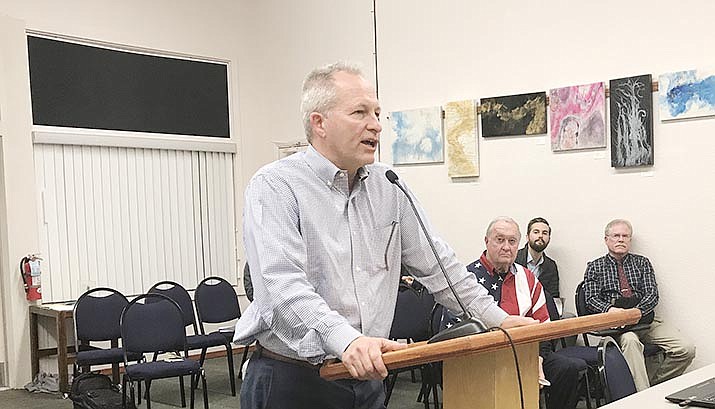 Sunridge Hotel Group President Brian Welker speaks to the Cottonwood Council at Tuesday’s meeting. The Council unanimously approved the $383,000 purchase of 2.2 acres of city-owned land at Sixth Street and West State Route 89A by Welker and his group after he announced he was dropping request to waive an estimated $100,000 in fees as part of the agreement. VVN/Jason W. Brooks

COTTONWOOD - After hearing from two longtime members of the business community Tuesday, and a surprise announcement by a developer, the Cottonwood Council unanimously approved a property sale for a major hotel project.

Cottonwood-area businessmen Eric Jurisin and Bob Backus both questioned waiving nearly all fees in the city’s sale of 2.2 acres to Sunridge Hotel Group to construct a 85-room Springhill Suites by Marriott hotel at Sixth Street and West State Route 89A.

However, after the council emerged from a 15-minute executive session about the purchase, Sunridge Hotel Group President Brian Welker told council members that the company would withdraw its request to waive fees, which will added up to an estimated total of more than $90,000. That doesn’t include to-be-determined water and wastewater capacity fees, which could approach $200,000.

The total build cost to Sunridge, an Arizona-based company that has built Marriott-brand hotels in several southwestern states, is $11 million.

“I don’t think this is the kind of precedent we want to set with the city’s financial position,” Jurisin told the council before the executive session, after having listed all the expensive improvements and fees he has absorbed as co-owner of the successful Haunted Group that employs more than 280 people between Jerome and Cottonwood.

Backus claimed he had improved city sales tax revenue by 400 percent as a businessman, and had paid many fees. He wondered how the city was in a financial position to offer such a waiver for a firm new to the city when it could not do so for those who “had been doing business in the city for 40 years.”

The only other person to speak about the sale to the hotel group was Andy Groseta, who pointed out that the appraisal of the property might not be current enough to be relevant.

Welker pointed out that about 60 percent of the Marriott customers who book rooms in tourism areas, such as the Verde Valley, are using reward points, so those are customers seeking the Marriott brand and are not taking away from the other hotel business in town.