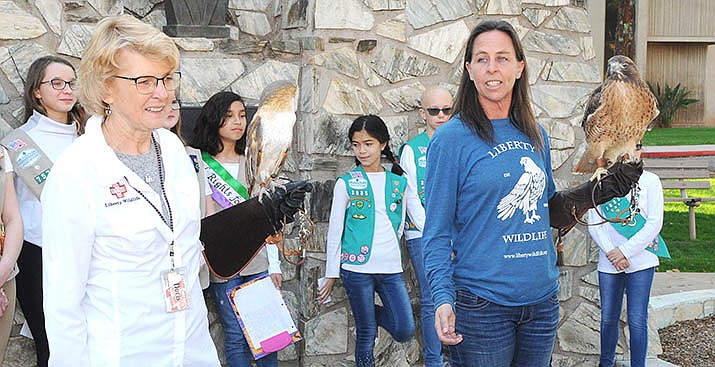 Doris Pedersen and Laura Hackett of Liberty Wildlife explain Wednesday the harm that can come to wildlife -- and birds in particular -- when balloons are released into the air. (Capitol Media Services photo by Howard Fischer)

PHOENIX -The way Mitzi Epstein sees it, it's against the law to throw things out the window of your car and pollute the environment.

So now she wants to extend that to what people release into the air.

Her HB 2339 would make it illegal to release balloons into the atmosphere "for any reason," including any promotional activity or product advertisement.

The issue, the Tempe Democrat said, is more than about visual pollution. She cited statistics showing that about 29 percent of the birds in the United States and Canada -- about three billion in all -- have disappeared in the last half century.

"It is more than just balloons," Epstein said. But she said the balloons are "the most lethal kind of pollution for birds and for every other kind of wildlife out there.''

That was backed up by Doris Pedersen of Liberty Wildlife which is involved in not only conservation and education but also helping injured animals.

"The wildlife actually eat them,'' she said of balloon residue. "It gets in their system and blocks their system.''

The idea is not original to Epstein.

She said it came from a local Girl Scout troop who were learning about pollution and wanted to do something about it. And many were at a press conference Wednesday called to draw attention to the issue.

"I will certainly oppose any legislation that penalizes children for releasing balloons into the air,'' he said.

But Epstein said that's not how her bill works. She pointed out that the legislation specifically does not apply to the accidental release of five or fewer balloons.

Epstein failed to get a hearing on a similar measure two years ago. But she said this one is different in a key way: There is no financial penalty for offenders, with local governments permitted solely to impose a penalty of community service picking up litter.

Still, she said, this isn't so much about enforcement as publicizing the danger of balloons.

"It's a reminder to everybody that litter really does harm wildlife,'' Epstein said.