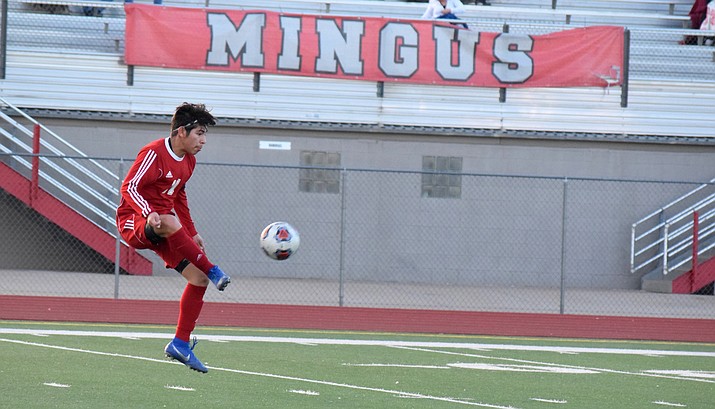 Mingus senior Eduardo Lazaro jumps to trap the ball during the Marauders’ 5-0 loss at home on Wednesday to Prescott. VVN/James Kelley

Mingus Union boys soccer suffered a shock defeat to a rival and it could hamper their playoff chances.

“I think we played the worst game of the season, so far,” Mingus head coach Luis Hernandez said. “We played really bad, Prescott played really good and the score reflects that way. We haven’t played this bad in a long time. We’re just one step too late on every thing, defensively, offensively and they just ran over us.”

Going into the game, Mingus Union was ranked 24th and Prescott was No. 25.

The Marauders started the game on a sour note, giving up a goal in the second minute.

“It changed the whole game,” Hernandez said. “That first goal was just a silly mistake. It was a really big silly mistake and that goal just changed up everything. It brought guys down, it brought our strategy down, we’re trying to adjust it through out the game and it just wouldn’t click.”

The Badgers then scored in the 28th minute, the 31st and converted a penalty in the 38th minute, sending the Marauders into the locker room with a 4-0 halftime deficit.

However, Mingus Union had much more possession and had more chance in the second half and didn’t give up the fifth goal until the 76th minute.

“When we went in at halftime, we changed formation, we changed the idea of how we were going to play in the second half and it worked It worked, we were already down 4-0 by half time but we only conceded one goal second half I feel like the best half we played was second and it still wasn’t there,” Hernandez said.

Since the rankings debuted last week and the Marauders were No. 15, they have slipped to No. 22 last Thursday, then to 24th on Wednesday before falling to 25th on Wednesday. The Marauders now hope Prescott continues winning, Wednesday’s victory was their second straight. However the -5 goal differential on Wednesday doesn’t hurt the Marauders other than the loss.

“The way power points work is for example, we lost to Prescott,” Hernandez said, “if they go out there and start beating these tough teams, start beating all these big teams, we move up with them because they beat us. Power points is just funny, it’s silly, for example now say that we beat them, say that we beat Prescott this game and they go out there and they’re still beating these tough teams, so instead of us getting these minimum power points from them, we’re getting max power points, so we’re moving up even higher then where we would be, so that’s how power points work. It’s not by points differential, it’s just depending on who you beat and who you lose to and how they play against other teams.”

Getting into the top 16 and hosting the state play-in is a still an achievable goal for the Marauders.

The Marauders travel to No. 32 Chandler Seton Catholic Prep on Friday. Their next home game is Jan. 31 against No. 23 Coconino.