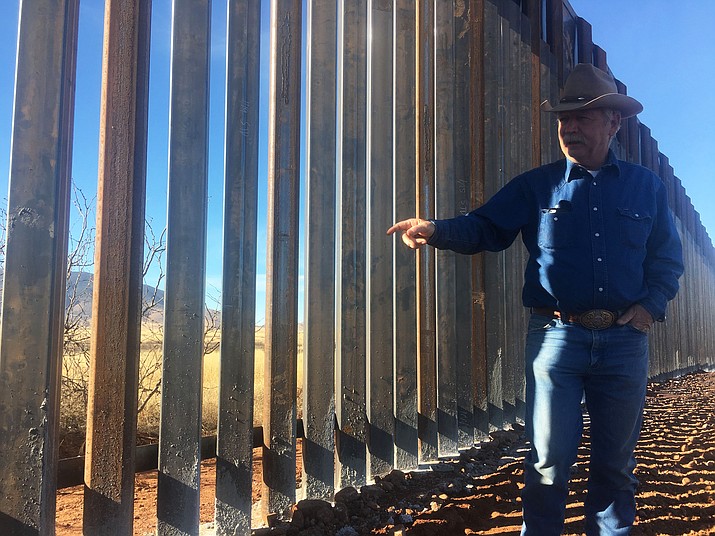 John Ladd stands near the border fence located on his ranch in Arizona. (Photo by Garrison Murphy/Cronkite News)

PHOENIX -- A House panel voted Wednesday to strip local governments of their ability to require permits before any landowner can build a wall along the border.

The 4-3 party-line vote by the House Committee on Federal Relations came after testimony from former Colorado Congressman Tom Tancredo, now an advisory board member of We Build the Wall, told of problems his organization encountered when constructing a half-mile barrier in Sunland Park, N.M. along the Rio Grande River near El Paso.

Tancredo said the wall eventually was built after the permits were obtained. But he said there was a costly delay, with council members saying they really didn't want to approve the wall in the first place.

HB 2084, crafted by House Majority Leader Warren Petersen, R-Gilbert, would bar cities, towns and counties from requiring a building permit if it to construct a wall "on or adjacent to the international boundary line'' and the landowner has provided written consent.

Facing questions of safety, Petersen agreed to add a requirement for the property owner to provide an affidavit from a professional engineer certifying that the wall was built "according to the plan and safety requirements.'' But that would not have to be done until two moths after the wall was done.

The legislation drew strong support from Art Del Cueto. He is the vice president of the 16,000-member National Border Patrol Council as well as the president of the local union that represents agents in the Tucson sector.

Del Cueto said he has no illusion about walls completely securing the border.

"What it does do is create a deterrent,'' he said. And he said it gives Border Patrol time to get agents into the area.

And Del Cueto said this is no different than people locking their doors at night.

Tancredo said the landowner in New Mexico who owns a brickyard had asked federal officials to build a wall along his property after multiple instances of vandalism and having property stolen.

He said the response was that the property was not suitable for a wall because of its topography. And they estimated the cost at $20 million.

Tancredo said his group managed to construct the all-steel fence in 11 days -- after going through the paperwork -- and for only $8 million.

Rep. Mark Finchem, R-Oro Valley, brushed aside concerns that a wall or other barrier might cause environmental damage, eliciting testimony from Del Cueto about trash left behind by people crossing illegally.

"The ultimate local control is the property owner,'' said Finchem. He said if someone wants to build a 20-foot wall and even paint a mural on it, "that would be their choice.''

Rep. Gail Griffin, R-Hereford, said it's even more basic than that.

While several individuals and organizations signed up against the measure none of them testified Wednesday. The measure now needs approval of the full House.