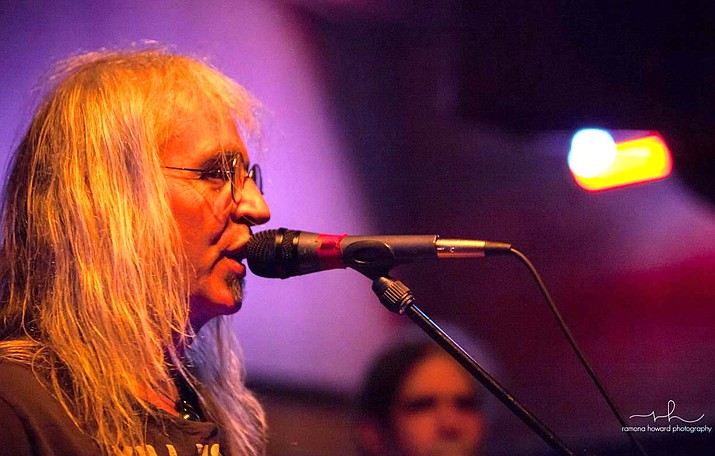 Tommy Rocks plays nothing but Beatles songs the last Friday of each month. You can sing along with Tommy to all your favorite Beatles tunes.

Rick Cucuzza is a “one-man-acoustic-band”, from Prescott. Born in the early 50’s and raised in southern California, Rick grew up at a wonderful time in the history of the area and in music. He began playing bass at 15, but he soon switched to guitar finding it to be a more expressive instrument. He has owned and operated his ever-growing recording studio since 1972.

Finger-style guitar by Robin Bryer. Robin is the owner of the Predator Zip Line (Located at Out of Africa) is also an up and coming Sedona musician. Robin has always loved music and playing guitar. His hobby is becoming more of a passion, and he’s been performing in Sedona music venues. Robin plays guitar and sings at Vino Di Sedona almost every Friday afternoon, 3:30-6 PM.

Dan Rice hosts Sedona’s best Open Mic, every Thursday night. Open Mic is an opportunity to hear professional musicians along with new musicians hoping to break into the music scene, all on the same night. Each musician is allotted time to play, and musicians and audience members get to hear different musicians performing a variety of genres; all music styles are welcome. Musicians are encouraged to arrive early.

Tommy Rocks plays nothing but Beatles songs the last Friday of each month. You can sing along with Tommy to all your favorite Beatles tunes. Tommy is an acoustic rock musician who has performed thousands of shows throughout America. Known for decades as a guitarist and singer, in Arizona he is better known for his wildly popular Beatles shows, as well as his solo acoustic performances. He is also regarded as one of the top ukulele players in the state (Tommy made the cover story of Ukulele Magazine in the winter of 2018).

Enjoy a fun night with Rick Busbea and his “Live Jukebox.” Rick is a must see Sedona musician who provides a lively and upbeat show. Rick plays some originals, but his passion is cover songs that take his audience down “memory lane.” This belief led to the creation of the “Rick Busbea Jukebox” so his audience can pick favorite songs for him to play.

Tim Young is a singer-songwriter and guitarist who plays upbeat music that you can tap your feet to! Before moving to Sedona, Tim had a thirty-year music career in NYC where he performed hundreds of shows and released three CD’s. He was raised in the heyday of AM top forty radio and the Folk music boom, his inspirations are everyone from Bob Dylan, Joan Baez, and Arlo Guthrie to The Beatles, Sex Pistols, Ramones, Cars and Nirvana.

Instrumentally, Tim is a stand out rhythm guitarist, both acoustic and electric. He has composed music and songs for TV and several independent films. Tim’s lyrics are inspired by personal relationships, politics, the bar scene, and the music business.

Life Is Beautiful front man, lead singer, and guitarist, KB Bren, performs solo the first Tuesday of every month. KB is a long time Sedona resident and a life-long musician who has written at least 1,000 songs, fronted numerous local bands (Grateful Fred, Cold December) and played with the LA based 80’s band Fastway.