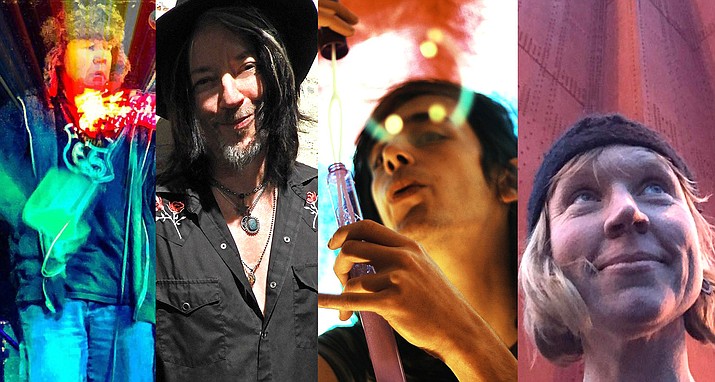 All performances will be at the Sedona Public Library, 3250 White Bear Road, Sedona

Brian Jaba Smith is a former musician whose short-story collection Spent Saints led to a collaboration with his filmmaker wife, Maggie Rawlins Smith, and Spent Saints is now a series available on Amazon Prime.

Brian Smith currently writes a column for the Tucson Weekly newspaper titled Tucson Salvage about people attempting to rebuild their lives.  This project led to another collaboration with Rawlins Smith and a documentary also titled Tucson Salvage that recently received an Oscar nomination.

Friday night, Jan. 31, musician, artist and former Sedona poetry slam champion Joshua Wiss will open the show with both music and poetry and the program will feature readings from and a showing of an episode of Spent Saints.  Saturday night, violinist Barry Smith will open a show, which features readings from and a showing of the documentary Tucson Salvage.

Maggie Rawling Smith is a mother, a writer/director and LGTBQ+ activist from Phoenix, Arizona. She learned as much from early morning work trucks and late night subway rides as she gleaned from the hallowed halls of Northwestern University, University of Virginia and Cal State LA. Maggie co-wrote and executive produced the Amazon Prime series, “Spent Saints,” based on her husband Brian’s debut collection of short stories.

Joshua Wiss is a musician, poet and visual artist who currently resides in Phoenix. His work attempts to magnify the importance of gratitude and love through a modern lens. When he is not selling records at his day job, Josh busies himself drawing giant mushrooms and recording music of his own.

Barry Smith has been playing the violin for over half a century. What began as a hobby has carried him into a life-long career, in band Gentlemen AfterDark and then solo. Barry’s instrumental music is electrifying and unique. Featured in Amazon Prime’s “Spent Saints” web series, Barry is set to score the forthcoming short documentary, “Love from La Frontera.”

Poetry and Prose Project host and co-founder Gary Every is extremely excited about the shows to kick off the 2020 season. “We really wanted to do something special to kick off this year’s Poetry and Prose Project, celebrating our new and expanded partnership with the library.  Poetry and Prose Project has been blessed with an extremely loyal and expanding audience. If we were going to do another season it was important to reward our audience with big heaping helpings of talent and ideas. Both Friday and Saturday should be wonderful shows.” Mr. Every is an award winning journalist and the author of books such as The Saint and the Robot, Cat Canyon Secrets, and Shadow of the OhshaD.