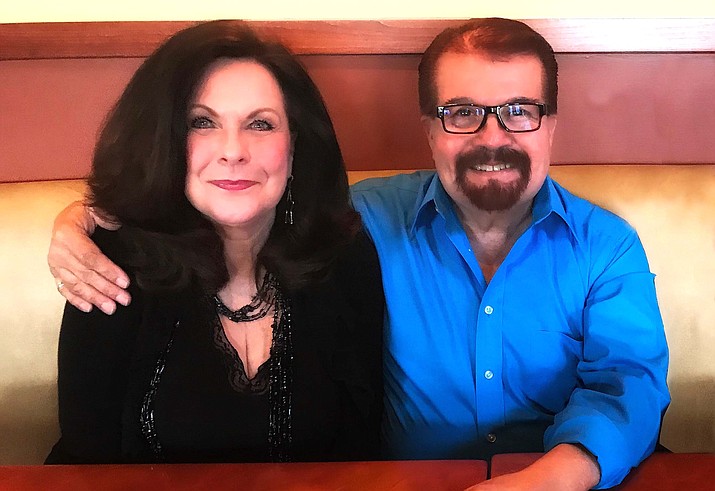 Rosemary will be joined by the talents of drummer & percussionist: Frankie Chavez; guitarist: Jack Petersen; and guitarist: Stan Sorenson.

In their successful performance and recording careers, Rosemary and Frankie have traveled internationally and played numerous upscale venues, concerts and clubs. As a drummer and percussionist, Frankie has worked with such greats as Lionel Hampton, Stan Kenton, Woody Herman and Larry Carlton to celebrities like Mitzi Gaynor, Pat Boone and Bobby Gentry.

Vocalist Rosemary has toured under the direction of world-acclaimed conductor Weston Noble, and has an extensive performance and recording career including three songs on the movie soundtrack album ROAR starring actresses Tippi Hedren and Melanie Griffith.

Rosemary and Frankie’s latest CD “A Sedona Christmas” was released in December 2019 to exceptional reviews and Airplay. Producer Frankie stated “We wanted to include “Merry Christmas Darling” on our CD in remembrance of the beauty of Karen Carpenter, of The Carpenters, and her extraordinary talent and spirit.”

Several years ago, Randy L. Schmidt, critically acclaimed author of the book “Little Girl Blue: The Life of Karen Carpenter,” a Wall Street Journal best seller, interviewed and included Frankie as part of that book. In 2016 Frankie was also interviewed and was part of a documentary celebrating the best loved songs of the biggest selling sister and brother act in music history, The Carpenters. The documentary, which aired in the UK, was titled “The Nation’s Favorite Carpenters Songs.” Frankie, along with Burt Bacharach, Petula Clark, and others, recount their association with both Karen and Richard.

Last Fall, author Randy L. Schmidt once again contacted Frankie asking him to be part of an upcoming documentary on Karen entitled “A Song for Karen. The Legacy of Karen Carpenter.” In October a film crew from award winning AMS Pictures, an Emmy Award-winning production company, came to Sedona and shot footage of Frankie while in the studio finishing up the CD. Randy L. Schmidt captured the legacy of Frankie’s involvement with Karen during this interview as Frankie shared her wanting to become a drummer and their time spent together in high school. As her first drum teacher, he not only taught her drum concepts but also shared stories with her of his mentor and friend, Buddy Rich.

While in the studio, the film crew also captured for part of the documentary, Rosemary singing “Merry Christmas Darling” as well as her singing her original composition “Angels All Around Us.” “I have frequently been asked when I was going to have a recording of my song “Angels All Around Us” and we knew this was the time for its release” Rosemary stated.

CDs are available at live performances or go to: https://store.cdbaby.com/cd/frankieandrosemarychavez to download your copy. Rosemary & Frankie’s website is: www.chavez-music.com and you can hear their music on iTunes, Amazon Music, Google Play Music, Spotify, YouTube Music and of course, CD Baby.