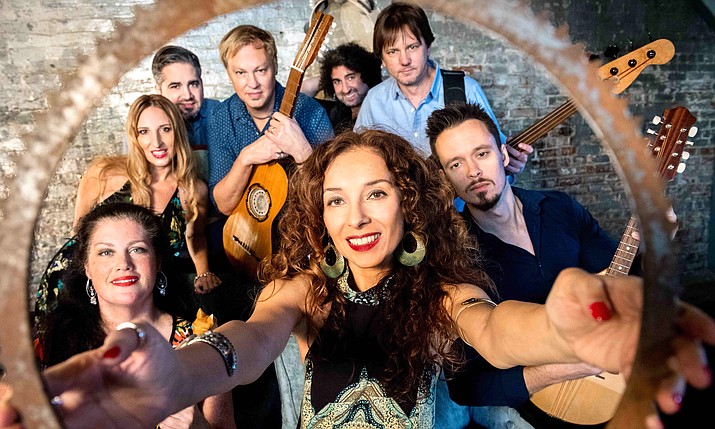 “Marsico and Rossi, visual and musical cynosures with their contrasting looks and twining vocal lines.” - PopMatters, US

• What: Newpoli in Concert from Italy

☞ 2018 Finalist in USA Songwriting competition for “So’ Emigrant’ “

Old Town Center for the Arts will present Newpoli a world music group from Italy, performing music from the south of Italy laced with influences from all of the surrounding Mediterranean cultures. Hear this exiting group live in concert on Saturday, Feb. 1, 7 p.m., at OTCA.

Called “a brilliant outfit, who grab southern Italian traditional music by the neck and recast it in a dramatic style” by Songlines (UK), Newpoli is a unique group with a powerful sound and a 21st century take on the traditional music from their part of the world.

Newpoli performs folk songs and dance music mainly from the regions of Campania and Puglia, and integrate a wide variety of styles, such as Tarantella-Pizzica, Tammuriata, Villanetta and the Neapolitan Canzone. The group stirs up a mesmerizing sound that also borrows from the traditions of Greek and Turkish Grooves, Mediterranean and Spanish colors, and a contemporary sensibility they call “Mediterranean Pulse - Ritmi della Terra.”

The group is fronted by singers Carmen Marsico and Angela Rossi, a pair that ‘Pop Matters’ in 2016 called “visual and musical cynosures with their contrasting looks and twining vocal lines.” You’ll also hear the percussion instrument Tamburello played by virtuoso Fabio Pirozzolo, pounding out the heartbeat of Newpoli’s music, while the two female singers start up a wild, frenetic dance, infusing the music with a drama and passion that can be heard in every note.

“This is a unique opportunity for our Verde Valley/Sedona audience to hear and see the exciting interpretations of traditional and originals, that draw deeply from one of the world’s lesser known music traditions,” co-Director of OTCA William Eaton commented. Newpoli is Italy’s next inspiring interpreter of southern Italy’s taranta tradition, and has won numerous awards, including the “Best World Traditional Album” and “Best World Traditional Song” for the Independent Music Awards.

This is what the press has been saying about Newpoli:

Tickets for Newpoli are $20 advance, $22 door, $25 reserved seating. Tickets are available online at showtix4u.com, and also available in Cottonwood at Mt. Hope Foods and Desert Dancer, and in Sedona at The Literate Lizard Bookstore. For more information about upcoming events, visit oldtowncenter.org. For further information, contact Elena Bullard at 928-634-0940.