Man killed by Sedona PD had violent history in Oregon 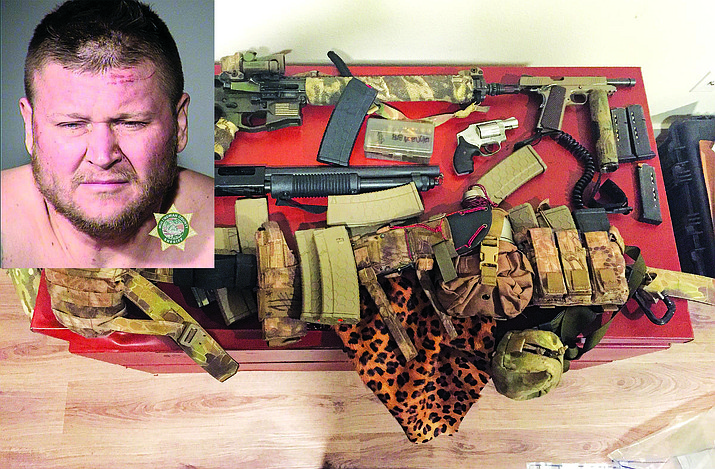 Sedona Police shot and killed Jonathan David Messare, 41, last week. Messare had multiple contacts with police in Oregon, where he was allegedly found to have been stockpiling weapons and ammunition. Courtesy of Portland Police Bureau

SEDONA - A man killed by Sedona police last week had a history of violence against an Oregon officer, according to law enforcement reports.

According to Portland Police Bureau reports supplied by The Oregonian newspaper, Messare was arrested in early March 2019 after an incident at a middle school.

Portland police said they were called to a middle school in southeast Portland one weekday afternoon. Armed with a hatchet, two knives and other items, Messare had stripped naked on the middle school’s baseball field and was yelling lewd threats when police got to the school.

As Portland police attempted to apprehend Messare, police allege, he ditched his hatchet and one of the knives, then charged the officers. As officers attempted to arrest him, Messare stabbed one of them in the hand with a knife, reports state.

That incident prompted school officials to lock down the campus temporarily. Messare was arrested and taken to jail on charges of assault, resisting arrest, criminal mischief and disorderly conduct and four counts of violating a restraining order, and while he was in jail, police searched Messare’s apartment and allegedly found he was stockpiling guns and ammunition.

Police found an AR-15, a shotgun, a semi-automatic handgun and a .38-caliber revolver, along with an array of ammunition and tactical gear, at Messare’s apartment, police said. Unlawful possession of a firearm was added to his charges.

Messare was taken into custody again in July in a different Oregon county. According to a report from the Tillamook Sheriff’s Office, a police chief noticed a gate to a storage facility was open, and the chief found Messare in an open storage unit.

Messare, a report states, was in the process of building a barricade out of metal and other items, police said, and said disconcerting things indicating he was paranoid, and that he was afraid of law enforcement officers and other people.

He was wearing a combat helmet and had at least one knife and was waving a hatchet, police said. He was taken to a hospital; it isn’t clear if he was booked or jailed.

As of Monday, Jan. 20, when Messare was killed in the Sedona incident, there were two active Oregon bench warrants out for his arrest.

The Jan. 20 Sedona incident occurred in the early afternoon shooting occurred in the 50 block of Newcastle Lane. A resident of that block had called 911 to report an unknown man shouting in the vicinity while in possession of a machete and a stick.

The caller also indicated the man was possibly cutting himself with the machete.

In a release, the Sedona Police Department said officers arrived on scene and contacted Messare at 1:29 p.m. At 1:32 p.m., shots were fired, with officers immediately calling for emergency medical care, and at 1:40 p.m., Sedona Fire District personnel declared Messare dead.

Any witnesses with information regarding the incident are encouraged to contact the Arizona Department of Public Safety at 602-223-2212.