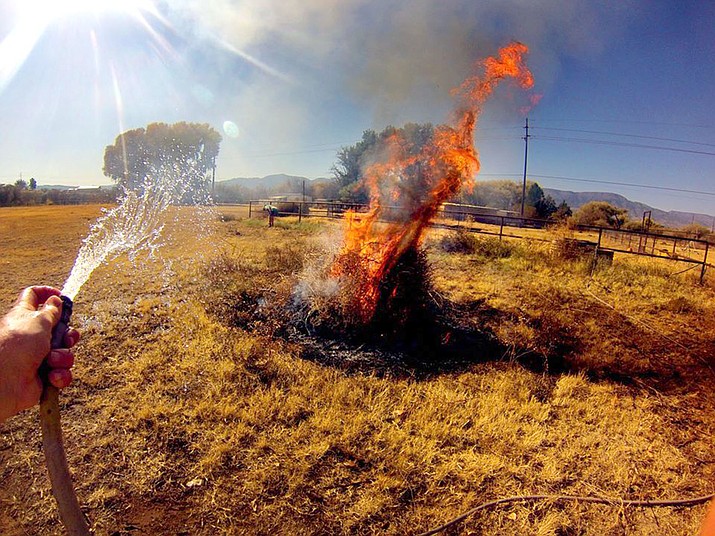 CAMP VERDE — Typically, the first of Copper Canyon Fire and Medical District’s two annual burn seasons is from March 1 until May 31.

This year, that first fire season will begin on Saturday, according to Copper Canyon Fire Marshal Ken Krebbs.

Copper Canyon Fire and Medical District will start this year’s first fire season on Feb. 1 because “we have many farms in our community and they need the time for burning off land before they can plant in the spring,” Krebbs said Tuesday.

“It is safer to burn now than later as we start getting into wildland season,” Krebbs said.

Krebbs also said that Copper Canyon Fire, which serves the Beaver Creek and Camp Verde communities, will “now be looking at air quality also, and if it is in a bad range we will not allow burning on those days.”

Although Copper Canyon’s burn permits are free, they must be renewed each year, Krebbs said. The permit allows burning of yard trimmings, brush, weeds, grass, cut trees and crops. Burn hours are from 8 a.m. until 4 p.m. on burn days.

Permits must be activated through the Cottonwood Dispatch Center, 928-649-1397, before burning to verify that weather and wind conditions are proper and safe for the day.

Copper Canyon’s burn permit application includes a list of conditions for burning. Conditions include burning only on designated burn dates.

The permit does not allow the burning of household waste or prohibited materials such as chemically treated wood, linoleum flooring, plastic or rubber products, or batteries. A complete list of prohibited items is included with the burn permit application.

According to Copper Canyon’s burn permit application, burning “shall be done only where other methods of residue disposal are impractical or unsatisfactory,” pursuant to the International Fire Code and Arizona Revised Statutes 49-501 and 13-1706.

No change to burn schedules at Cottonwood, Verde Valley fire

At the Cottonwood Fire and Medical Department, burn season is always from Feb. 1 until May 31, then from Aug. 1 until Nov. 30, Fire Chief Mike Kuykendall said.

“More to do with pollution and aversion,” Kuykendall said. “Not so much a safety issue, but the cool air pushes the smoke back down.”

At the end of the day, Kuykendall said scheduled burn seasons are a matter of best meeting the needs of his community.

“Many, many, many years, ago, the burn seasons weren’t as defined as they are now,” Kuykendall said.

“Verde Valley Fire District burns all year,” Moore said. “We do not close and open seasons.”

Moore added that Verde Valley Fire complies with burn restrictions in the summer months, but that “(we) are open the rest of the year.”