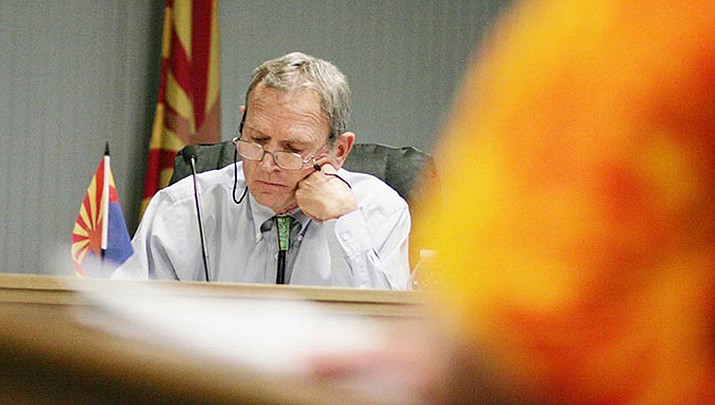 UPDATE: At 1 p.m. Wednesday, Russ Martin, the Camp Verde town manager, told the Verde Independent that the agenda for council's Feb. 5 meeting will be ready no later than Monday, Feb. 3. Earlier Wednesday, Martin said that the agenda "should be available within the next 48 hours."

CAMP VERDE — Feb. 5, the Camp Verde Town Council is expected to decide how to handle a complaint filed against Council Member Joe Butner.

Seeking reappointment to the town’s Planning and Zoning Commission, Bruce George met with council at its Jan. 8 special meeting. According to the complaint George filed with the town on Jan. 13, Butner asked him questions “in an interrogative manner.”

According to Martin, Sims will draw up language to be used on the Feb. 5 agenda. That agenda, Martin said, should be available by Monday, Feb. 3 at cvaz.org.

“At least one agenda item, maybe a couple,” Martin said. “The agenda will detail some stuff out. Council will then have deliberation and decision making.”

In his complaint, George stated that Butner asked questions “trying to introduce some unsubstantiated allegations.”

“Nobody who is volunteering their time for the benefit of Camp Verde should be treated in the manner I was subjected to during this council meeting,” George stated in his complaint. “This was very unprofessional conduct and is against all the rules in the Town Code of Conduct.”

Video from council’s Jan. 8 meeting can be seen at cvaz.org.

At council’s Jan. 8 meeting, Butner distributed copies of a Dec. 13 complaint against George to the attending council members. The report was obtained on Dec. 19 through a public records request by Council Member Bill LeBeau.

The complaint against George was called in to the Camp Verde Marshal’s Office just before 6 p.m. Friday, Dec. 13. The copy Butner handed out was only the original complaint, as the Marshal’s Office had not yet conducted a follow-up interview with George.

The Marshal’s Office conducted its follow-up interview with George on Jan. 9. According to that report, George denied the accusation.

In conversation with the Verde Independent, George also denied seeing the report prior to Butner passing it out to his fellow council members.

No charges were filed against George and Marshal Corey Rowley has said the case is closed.