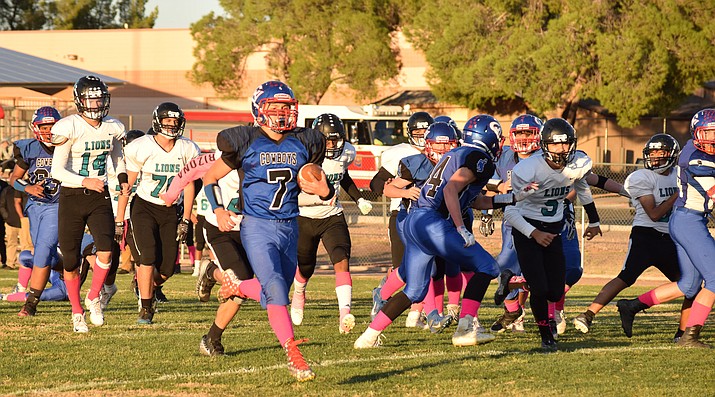 Camp Verde High football will remain in the Verde Region, which although it changed significantly, will feature familiar opponents.

On Tuesday the AIA announced the initial regions for 2020 and the Cowboys stayed in the 2A Verde Region. CV is joined by Sedona Red Rock, Phoenix North Pointe Prep, Scottsdale Christian, Scottsdale Prep and Phoenix Valley Lutheran.

“I wanted some games to be competitive and it looks like, initially looking at it right now, we’ve got a shot to have five competitive region games and I don’t think anybody can ask for more than that,” CV head coach Rick Walsworth.

However, like the Cowboys, Walsworth said the other Verde teams also return a bunch of players from 2019.

The Verde Region was formed in 2018. The 2A football regions, unique to the gridiron, are named after Arizona rivers. The others are: San Juan, Little Colorado, Salt, San Pedro, Rillito, Gila and Agua Fria.

“Scottsdale Christian’s been down for a couple years but they hired a new head coach and I think they made a really good hire and I think they’re on the rise,” Walsworth said. “Valley Lutheran’s got a bunch of returners and Scottsdale Prep has quite a few too.”

Starting in 2020, the AIA is aligning teams into the six football conferences based on on field performance. Every year those conferences will be adjusted, whereas the other sports realign every two years.

“I think it’ll work well,” Walsworth said. “As far as the regions came out this time around, I think it’s gonna open up some things…A lot of chances for teams to compete and try to win a region championship. It’s nice to be in a region where it looks like it usually could be competitive top to bottom.”

With the regions changing every year instead of every two, the AIA will set the team’s schedules, with some suggestions from each school on who they want to play.

“We’re going to have limited input on the scheduling, the conferences are going to do it,” Walsworth said. “Because that would put rural schools really behind the eight ball as far as getting home games with a one year schedule. We talked about that one when the idea first game out, the AIA’s gonna have to handle scheduling because nobody’s gonna want to make a trip that they wouldn’t have to make the next year.”

Sedona Red Rock, which had hoped to move down to 1A and 8-man football, saw its appeal denied and stayed in 2A. The Scorpions had been in the Salt Region.

“I’m sure it’s great for the communities,” said Walsworth who was head and an assistant coach at Sedona Red Rock. “It’s nice to have a school close by that you’re still playing, not everybody has that. They’ve split us up before so we were prepared to get split up again and so we’ll see how it goes.”